Imagine a time when you tried to explain to the youngest in your family something of great importance, of serious gravity --or simply had some words of wisdom to pass on-- only to find them fighting over the remote control or whose turn it was to ride in the front seat. Or you may have taken a group of people on a field trip and tried to convey the significance of a piece of art or the historic events events that took place there, only to find them more interested in the schedule and location of the cafeteria.

Something similar happens to the Lord in today’s Gospel. He takes the disciples apart and they set out on a journey through Galilee back to Capernaum. Then, along the way He instructs them, or at least He tries to… He conveys to them a message of great importance: who He is and what is going to happen to Him. He warns them of His upcoming passion, but also of His ultimate triumph over death and evil with His resurrection. He wants them to be prepared, He wants them to understand. But, they do not understand, and the Scripture says also that “they were afraid to question him.”

Perhaps they did not want to look like fools in front of others; perhaps they were afraid of being scolded by Jesus for not paying attention, or afraid of being found unworthy to be called his disciples. So, instead of asking him, instead of seeking to understand, they let their fears, their doubts or their routines get in the way and they get distracted by other unimportant things such as “who is the greatest” among them. In today’s second reading, St. James warns us that if we are consumed by jealousy, and preoccupied only with selfish ambition, then disorder and chaos, murder and war, and disregard for other people’s lives and dignity follow.

But Jesus doesn’t let the disciples off the hook that easily. He doesn’t give up on them despite their hardness of heart. As He walks with them and shares His most inner self, He also listens to and observes them. And as soon as they get home, He asks them, “What were you arguing about on the way?” And Scripture says that, again, “they remained silent”. While the first time they were afraid to ask because they did not understand what He was saying, this time their silence is due to shame, and it accuses them. They know well that the cause of their dispute on the way was not a very lofty one, and they know that Jesus knows.

At this point the Lord does something very significant. He takes the Twelve apart and, responding to their argument, He teaches them a lesson: in the Kingdom of God to be the first means to be the last and the servant of all. It means going out to encounter the other, attentively listening to and accompanying them, receiving them and their struggles, instructing them with care and patience, and particularly, learning from and protecting the least of these, especially the children and those who are like children in their awe, their trust and their openness to God’s will.

Once again, Jesus finds a way to meet the disciples where they are. It’s certainly not where He would like them to be… but He goes out to encounter them. He starts with their worries and concerns, only to bring them to a deeper understanding of His person, his message, and of the kind of disciples He wants them to be. He hopes this frank dialogue and intimate discussion will effect a conversion in the Apostles’ hearts, minds and attitudes -- and by extension in those to be instructed by them when He is gone.

First, the significance of the journey. The Lord walks with us and invites us to walk with Him. He teaches us along the way. And every time we accept that invitation there is movement, there is change, there is growth.

Second, the Lord wants us to talk to him. He wants us not to remain silent but to ask, to come to Him especially when we do not understand, when nothing makes sense, when we cannot clearly see the path forward.  And He also calls us back to Him when we go astray. In the intimacy of the home, He wants to make sure we understand. If we are open to such intimacy with the Lord, then, what would it take for us to make our home His home, and the House of the Lord our home? What can we do so that the Word of God finds a home in our hearts?

Third, the Lord invites us to live a righteous life, a life guided by the “wisdom from above which is first of all pure, then peaceable, gentle, compliant, full of mercy and good fruits, without inconstancy or insincerity,” as the Letter of St. James reminds us today. Jesus invites us to a life that seeks justice and builds peace, but He doesn’t promise it will be easy. On the contrary, today’s first reading from the Book of Wisdom reminds us that the life of the just often upsets the wicked and puts them to shame by exposing their shortcomings, their lack of judgement and abuses. The truth disturbs those who seek to hide it and pursuing it might even lead to persecution.  But Jesus promises His disciples that He will be with us until the end of time and that our God will not allow evil to prevail.

In summary, the Lord invites us today to listen more attentively, to talk to Him especially when we don’t understand, and to identify and get rid of those things, actions and attitudes that distract us from truly listening to the Word of God and living like a true disciple.

What does this all mean in my life? How can I listen to the Lord more attentively? How can I go out of myself and my comfort zones to encounter others? How can I be a servant leader in my own reality and circumstances? Can I recognize the Lord speaking to me and instructing me through the little ones, and through those who are discarded or live in the peripheries of Church and society? And finally, am I able to recognize people around me living Christ-like lives in whom I can find strength and inspiration?

As we strive together to find answers to those questions, with the bold confidence of a child, let us proclaim with the psalmist today: “The Lord upholds my life.” I have nothing to fear. 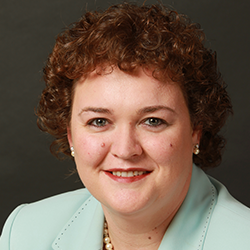 María del Mar Muñoz-Visoso is executive director of the Secretariat of Cultural Diversity in the Church at the United States Conference of Catholic Bishops. In that capacity,  she supervises the and directs the work of the staff serving the Bishops’ Committee on Cultural Diversity in the Church and its five Subcommittees (for African Americans, Asian and Pacific Islanders, Hispanics, Native Americans, and the Pastoral Care of Migrants, Refugees and Travelers).  This includes the current efforts on the V National Encuentro of Hispanic/Latino Ministry.

Mar holds a B.A. in Communications with a major in Journalism from C.E.U. San Pablo in Valencia, Spain, and a master of theological studies (M.T.S) from the Madonna University in Livonia, Michigan. Before her appointment as executive director in 2012, she was assistant director of Media Relations since 2007. She also was a consultant to various USCCB committees, including on Communications, Women in Church and Society, and Divine Worship in Spanish. Her pastoral work specializes in Hispanic/Latino and intercultural ministries.

Prior to her work at the Bishops’ Conference, Mar worked for the Archdiocese of Denver in various capacities for over a decade, including as director of Hispanic Ministry, and first executive director of Centro San Juan Diego, the archdiocesan pastoral institute and adult education center for Hispanics. In 2010 Pope Benedict XVI awarded her the BenemerentiMedal for “sustained and exemplary service to the Catholic faith.”

Mar is a published author and speaker and has over two decades of experience as an editor and journalist. She founded El Pueblo Católico, a Spanish-language diocesan newspaper. During the papal transition she assisted the USCCB Media Office efforts in Rome, and was part of the Communications Team during Pope Benedict XVI’s 2008 and Pope Francis’ 2015 Papal Visits to the United States. She is married and the mother of three children.