...Whoever wishes to be great among you will be your servant;

whoever wishes to be first among you will be the slave of all.

For the Son of Man did not come to be served

but to serve and to give his life as a ransom for many."

‍This passage, Jesus’ words, these sentences have seeped into the very depths of my existence as a

I have internalized being a servant and slave in my society and often regarded my female-ness,

As a badge of honor that God has gifted me with.

It’s taken me most of my life, but finally, I have accepted myself, my embodied self as compatible and cooperating with God’s plan of “lifting up the lowly” of “hearing the cry of the poor.” And most empowering of all “being the voice of the voiceless” amidst a quiet hierarchy that does everything in its power to ignore, admonish, belittle, overlook, dismiss and even erase my existence.

But let me be a cautionary tale:

I had a revelation, so listen to my declaration:

We hold these things to be self-evident that all men are created equal.

And when I meet Thomas Jefferson (unh!)

I’ma compel him to include women in the sequel (work!)
‍

This is problematic! Caution: Women, queer folx, people of many colors, non-cis-gendered people! Do not conform to the idea that we must be servant or slave to the powers that be!

We know the world is far from perfect or ideal. AND we know that Jesus’ teachings, Jesus’ example, Jesus’ life, death, and resurrection give us an opportunity to live in a way that is most liberatory, most free, most loving.

To live and to love is not to subjugate yourself under the weight of the cross.

To live and to love is not to subjugate yourself to “it’ll get better later” of suffer now, experience peace in heaven “later” mentality.

Instead, make yourself as vulnerable as a servant or slave. Catch the simile: “as a”

Again: CAUTION! Do not become a slave or servant to the ways of the world or the powers that be, or even to a simple way that contributes to the de-forming of your neighbors.

Jesus spent his life, or at least his known ministry, RESISTING, QUESTIONING, OFFERING A DIFFERENT WAY while fully accepting all the consequences born of fear, control, manipulation, even order in this world.

He teaches his disciples, he teaches us, not to tyrannize people.

Jesus calls out the leaders in his time and instructs his disciples to avoid desiring being leaders that lead and organize through tyranny and using power over others.

All this foretelling of his own death is a call for each of us to die to our own self; to die to this status quo...Jesus’ death was a ransom for many.

Ransom in Greek meaning “does something” as opposed to the common definition of repayment.

His own death of self does something for us. His death on the cross next to two thieves revealed the empire’s logic. When threatened by difference that did not respond to their power, those in power will destroy.

Jesus’ death, this servant’s death was the resistence, served as the space to allow the question, and offered a different way… a way that leads to resurrection.

And this resurrection is not a hope in the future. Again, his death did something. His death liberates us from the hold of that de-forming control.

His death, our own dying of our selves or our systems that oppress, can and does something.

It LITERALLY liberates others.

Lord, let your mercy be on us, as we place our trust in you. 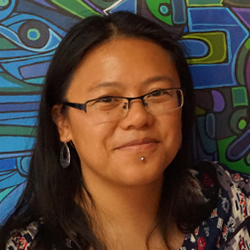 Jocelyn is a Catholic-Episcopal minister with a background in training leaders in deepening their cultural competency, educating to enhance diversity and multicultural awareness, and building a skill set of social justice practices that promote the dignity of each person and the common good. She ministers predominantly to discerning young adults and fractured organizational structures.

Most notably, she co-founded Contemplatives in Action, a retreat experience immediately following Hurricane Katrina and the subsequent flooding of New Orleans. Her facilitation and consultation style includes a deep listening and drive to create community that is worth living in with one another. Most recently, Jocelyn convenes QEIRS (Queer Educators in Religious Schools) and leverages her network to build capacity and advocacy especially for people most injured by current structures.

Currently, Jocelyn is the Pastoral Associate at St. Paul’s Episcopal Church in Burlingame, CA where she leads the [online] experience of prayer, education, and justice outreach and Associate Executive Director at Catholic Volunteer Network.

Jocelyn holds a Masters in Theological Studies from the Jesuit School of Theology at Berkeley and lives with her spouse and two daughters in Burlingame, CA.