In the early 1980s, during the period of the Marcos dictatorship in the Philippines, I worked as a community organizer of coconut tenant farmers in the province of Quezon. Wrongly suspected as collaborating with the communist New People’s Army guerillas, two fellow women organizers and I were surrounded by five heavily armed military men and brought to Camp Guillermo Nakar for interrogation. We were lucky we got released after three hours of detention. One of our farmer members, however, met a different fate; he was kidnapped and salvaged, murdered a few weeks later. During the dictatorship, 3,257 people were killed extrajudicially by the military, 35,000 were individually tortured and 70,000 were jailed.

Similar to the situation in the 1960s to the 80s when many developing countries in Asia, Africa, and Latin America were under dictatorships, fascism enveloped Italy in the 1920s. The Feast of Christ the King was instituted by Pope Pius XI in 1925  in response to this context, as well as, the increasing secularism. The Pope underlined the importance for duly elected political leaders to exercise their authority, taking into account the common good, and their subjects’ human dignity.

Today, we are witnessing again the revival of populist rhetoric, fascism, and the undermining of democracies. Then and now, these regimes have relied on propaganda, indoctrination, and what we call today fake news or “alternative facts.” The celebration of the Feast of Christ the King is an important reminder to Christians – political leaders and citizens alike – of what constitutes God’s reign and true Christian leadership.

The First Reading for the feast this year is taken from the Book of Daniel. Daniel himself was a government official and the book was written roughly in the 6thcentury BCE. Daniel had a vision of the downfall of four beasts, representing empires that ruled Israel through force and intimidation. Our reading, Daniel 7: 13-14 speaks of the Son of Man whose rule is the only one that would last forever.

The Book of Revelation from where the second reading was taken, likewise speaks of a vision of a  beast, which majority of scholars agree, refers to the Roman empire. Rev 16:13 likens the Roman instruments of propaganda and indoctrination to “frogs” that capture the prey with their tongues.

Jesus, referred to as “the ruler of the kings of the earth” in Revelation, is the antithesis of these political powers. In the gospel, we read him proclaiming: “I came into the world, to testify to the truth. Everyone who belongs to the truth listens to my voice.” (Jn 18:37) In contrast, Pilate the Roman governor interrogating Jesus, was not interested in the truth at all, but only in winning favor in the eyes of the local citizens.

Jesus clarified to Pilate that his “kingdom does not belong in this world” (Jn 18:36). The reign of God for Jesus is not the restoration of the Kingdom of David which is what many Jews were hoping for. While not directly political and military, nevertheless Jesus’ notion of God’s reign has strong political implications. In Jesus’ inclusive table fellowship, his rejection of rituals and beliefs that unnecessarily burden the poor and the excluded, and his destabilizing parables that bring down the mighty or honorable from their thrones, Jesus gave us a glimpse of what it is like in God’s reign. This vision posed a big threat to the guardians of the Jewish tradition as well as to the Roman authorities.

Neither a slave to public opinionnor cowed by public authorities, Jesus had the courage to speak about the truth of God’s reign and was willing to suffer for the truth that needs to be spoken.  In the gospels, Jesus often used the title of “Son of Man” to refer to himself. His authority, however,  will paradoxically be established ultimately on the foundations of the crucifixion, something that is radically opposite to other ways of establishing dominion

The Feast of Christ the King reminds us Christians that Christ must reign in our societies and in our hearts and minds. Do we foster God’s reign  when we buy populist rhetoric of us vs them, nationals vs immigrants, upright citizens vs  drug addicts and peddlers?  Does God reign in a society that promotes or tolerates the spread of  fake news or “alternative facts,” the forced separation of families, misogynist remarks, the jailing of critics, and extrajudicial killings?

The crucifixion of Jesus and the death of many other martyrs for faith and justice shows that the promotion of God’s reign is not easy and  entails sacrifice. The powers that be will not readily give up their dominion.  But our faith provides us with the basis of hope that in the end, it is God’s reign that will last forever.

With this, I wish you all a liberating feast of the reign of Christ! 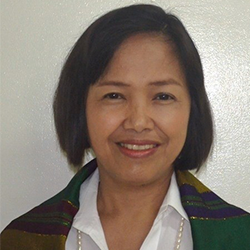 Dr. Agnes M. Brazal is associate professor and research fellow at the De la Salle University, Manila. She is past President and founding member of the DaKaTeo (Catholic Theological Society of the Philippines) and one of the first "mothers" of the Ecclesia of Women in Asia (EWA), an association of Catholic women theologians in Asia. Before becoming a professional theologian, she worked as community organizer, campus minister/student organizer, coordinator of the Basic Ecclesial Community Program of the Diocese of Catarman, Samar, and formator of social development workers.

She is author of forthcoming book Liberation-Postcolonial Ethics in the Philippines(Orbis, 2019), co-author of Intercultural Church(Borderless Press, 2015), and co-editor of eight anthologies: Living with (out) Borders(Orbis, 2016; 3rdplace, Immigration category, Catholic Press Association award); The Second Plenary Council of the Philippines(AdMU, 2016); Church in an Age of Global Migration (Palgrave Macmillan, 2016); Theology and Power(Paulist Press, 2016);Feminist Cyberethics in Asia(Palgrave Macmillan, 2014); Transformative Theological Ethics(AdMU, 2010); Faith on the Move(AdMU, 2008); and Body and Sexuality(AdMU, 2007; finalist, National Book Development award). She has published more than 50 articles in book chapters and journals that include Theological Studies, Concilium, Questions Liturgiques, Asian Horizons, Hapag, and others.

She currently serves as international advisory board member of Theological Studies, Louvain Studies, and International Journal of Asian Christianities, editorial board member of Budhiand Asian Theological Ethics Book Series, board member of DaKaTeo,Institute for Church and Social Issues and St. Catherine of Siena Virtual College, UK, and joint treasurer of EWA. She obtained her MA/STL and PhD/SThD from the Katholieke Universiteit Leuven.