The readings for the first Sunday of Advent admonishes us to stay awake. They call us to be attentive to what is happening in our place and in our times. Today, I am very conscious of the human divisions within our global world and nation.

Recent events across our world and nation reveal serious divisions within the family of God: Wars in the Middle East and the ongoing Palestinian-Jewish conflict manifest our religious divisions among Christian, Muslims and Jews; Large scale immigration reveals religious oppression as families leave their homelands to seek peace and the recognition of their equality and dignity as human beings; Diversity of race, nationality, culture become terms of division rather than enrichment. Most prominent in our news media are the race and class divisions. The rich predominantly white minority have access to quality housing, education and ownership of goods as well as control of our corporations and social institutions.  The poor, on the other hand lack quality housing, education, possessions and decision making or participation in our major corporations and social institutions.

The wealthy are more visible and exercise power and control over our nation. The middle class is diminishing. The number of the poor is increasing.  The wisdom, gifts, talents and power of the poor is denied and/or rendered invisible and ineffective as they are relegated to the margin The availability of quality housing, food and education varies in accord with one’s class, race, national identity and location in the world. Unemployment, homelessness and poverty is increasing,

Gang violence among and between Black, Latino, Asian and Euro American gangs[1] and Police brutality reveal ethnic-racial and class division and systemic oppression. Secularity, the denial of the existence of God’s presence and role in our lives, is increasing and is accompanied by a rise personal narcissism, materialism and social indifference to the common good.

Racism, sexism, nationalism, imperialism, capitalism divide the human community. Some individuals and groups, such as the Ku Klux Clan, claim superiority or dominance over others based on their skin color, gender, economic status or nation of origin.

The reality of anti-black and anti-black bigotry and hatred of African Americans, Hispanic Americans, and Native Americans were made plain in our recent election as both candidates accused one another and both parties of racial and class bias and bigotry .

DIVISION, BIGOTRY AND HATRED CONTRADICT THE WILL AND WAY OF GOD!

God calls us to embody God’s universal unconditional love. Only then does our true identity as the People of God become visible. We are made in the image and likeness of the Triune God: Three distinct persons bound by the common identity of God. We are called to reflect in our lives the same unity diversity that characterizes God.

·      Let us expand our circle of those included in our Love of God and Love of Neighbor.

·      Let us “wake up and stay awake” by being attentive and seeking to construct and strengthen our individual, national and global relationships.

‘….stay awake! For you do not know on which day your Lord will come.

Be sure of this: if the master of the house had known the hour of night when the thief was coming, he would have stayed awake and not let his house be broken into. So too, you also must be prepared, for at an hour you do not expect, the Son of Man will come.”

If we stay awake, remain attentive to and embody God’s will and way our song will be the song of the psalmist. We too will sing with joy as we go to the house of the Lord!

R. Let us go rejoicing to the house of the Lord! 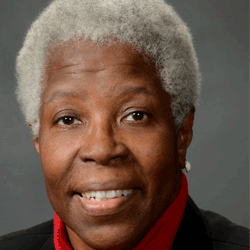 Sr. Jamie (aka “Sr.-Dr.” in some university contexts) has been a member of the Adrian Dominican Sisters since 1959.  Currently Sr. Jamie is a freelance Theologian, lecturer and a facilitator for Bible study at St. Ambrose and St. Thomas the Apostle parishes in Chicago and a lecturer for Pax Christi’s “Communities of Color Mobilizing for Peace” weekends. Prior to this, Sr. Jamie served as the Director of the Institute for Black Catholic Studies and the Katherine Drexel Professor of Systematic Theology of Xavier University of Louisiana from 2003-2011.   Additional ministerial appointments included being a member of the theological faculties of the Catholic Theological Union (1986 ‑1998) and Loyola University (1998- 2003), both in Chicago, and a Distinguished Visiting Professor of Theology in the Religious Studies Department at the University of Dayton, Dayton Ohio (January-May, 2003).  She most recently completed a one-year visiting professorship in the Theology in the Department of Theology at the University of Notre Dame (2012-2013).  She had previously taught at the University of Notre Dame as a visiting professor during the 2005-2006 academic term

Dr. Phelps holds a B.A. in sociology from Siena Heights University, Adrian Michigan (1969), an M.S.W. in Social Work from the University of Illinois at Chicago (1972); a M.A. in Theology from St. John’s University, Collegeville, Minnesota (1975) and a Ph.D. in Systematic Theology from The Catholic University of America, Washington, DC (1989) and an honorary doctorate from Aquinas Institute (2016). Her formal education has been augmented by participating in national and international seminars and conferences in the United States as well as Puerto Rico; Sao Paulo, Brazil; Jamaica; Toronto, Ottawa & Nova Scotia, Canada; Enugu, Nigeria; Johannesburg, Praetoria and Capetown, South Africa; Zimbabwe; and Rome, Italy.

She has edited two books Black and Catholic: The Challenge and Gift of Black Folk and coedited with Fr. Cyprian Davis, OSB Stamped in the Image of God: African Americans as God’s Image in Black. In addition, she has published more than fifty theological articles on issues of the mission of the Church, evangelization, inculturation, Christology, and spirituality. These articles have appeared in scholarly books and journals including The Bible Today, Missiology, New Theology Review, Theological Studies, U. S. Catholic Historian, Spiritual Traditions for the Contemporary Church edited by Gabriel O’Donnell and Robin Mass, A Troubling in My Soul: Womanist Reflections on Evil and Suffering edited by Emilie M. Townes, Taking Down Our Harps: Black Catholics in the United States edited by Diana Hayes and Cyprian Davis, and Black Faith and Public Talk, edited by Dwight N. Hopkins,  The Spirit in the Church and the Word edited by Braford E. Hinze and the 2008 Advent Meditation Booklet for Pax Christi.

Her most widely read article is “Communion Ecclesiology and Black Liberation Theology” Theological Studies, Vol. 61 #4 December, 2000. Currently she is in the process of research and writing a theological book on the local and global mission of the church in a multicultural society.

Sr. Jamie believes in developing institutions to ensure the on-going growth and development of theology and ministry in the Catholic and Black Catholic Community. She was a founding member of  the Washington-based National Black  Sisters Conference in 1968; a major consultant for the founding of The Institute of Black Catholics Studies in 1982;  the inaugurator and founding director  of  the Catholic Theological Union’s Augustus Tolton Pastoral Ministry Program which prepares Black Catholic laypersons for ministry in the Archdiocese of Chicago inaugurated in 1990 and the re-founder of  The Black Catholic Theological Symposium , a national inter-disciplinary theological  society for  Black-Catholics holding doctoral degrees in theology and related fields in 1991.

Currently Sr. Jamie is a freelance Theologian, lecturer and a facilitator for bible study at St. Ambrose and St. Thomas the Apostle parishes in Chicago and a lecturer for Pax Christi’s “Communities of Color Mobilizing for Peace” weekends. During the past 55 years she has devoted her life to public church ministry.  She has served the church and society as an educator, professional psychiatric social worker, community organizer, (Hansberry Parenting Project, Mercy Hospital and Chicago Child Care Society) pastoral minister, consultant, lecturer, liturgist, spiritual director, preacher, retreat director, administrator, scholar, theologian, author, editor and radio commentator and editor for NewYork’s Radio Solidarite.