Every time I read a section of the 34th chapter of Matthew, which is part of today’s Gospel for this first Sunday of Advent, I am struck by the passage:

Of course, the idea here is that we should be ready for Christ’s second coming because we do not know the day nor the hour when Christ will come again.

How should we be ready for Christ’s Second Coming? Isaiah and St. Paul use different images or pictures in this Sunday’s readings, but they both tell us HOW we are to prepare. Isaiah says the nations shall “beat their swords into plowshares and their spears into pruning hooks; ...they shall wage war no more;” that is, they shall make peace.

I recently returned from Poland, the homeland of my grandparents. While there, I was saddened to hear that many Catholics in Poland are NOT doing works of justice, peace, and mercy, at least toward LGBT people.

For example, the Archbishop of Krakow, in a homily, claimed that Poland is rid of the “Red menace” but is now suffering from the “rainbow menace.” This is not justice, peace, and mercy.

Another bishop publicly applauded a professor who wrote an article in a weekly magazine about LGBT people, calling them “traveling rapists.” This is not justice, peace, and mercy.

In another diocese, the LGBT community organized an Equality March, and before the event, the bishop claimed that the march was an “act of discrimination against Catholics.” It was nothing of the kind; it was a public parade for LGBT people and their allies to proclaim human rights for everyone in society. This is not justice, peace, and mercy.

But isn’t Advent a season of hope? Do I find hope despite this kind of discrimination against LGBT people in Poland and other parts of the world?

Yes, I really DO have hope. Many things give me hope for a future of peace, justice, and mercy, but I’ll mention only three.

Equality marches are happening not only in Poland. They are happening all over the world! In the last 20 years I have seen a couple hundred LGBT friendly parishes emerge in the U.S. And many of those parishioners are marching in Pride parades with their parish banners.

Second, Catholic parents I have worked with give me hope. 20 or 30 years ago these parents were very upset that their gay son or lesbian daughter was no longer going to church. Now these same parents are questioning why the church doesn’t accept their gay son or lesbian daughter. They want ALL their children to be happy and treated equally with the same rights in society and in the church. They are clamoring for peace and justice and mercy.

Third, Pope Francis gives me great hope for the whole Church. He is calling ALL of us to work as a community, to work in synods. A diocesan synod, for example, is a meeting of the bishop, not only with his advisors, but with parishioners and with people who were brought up Catholic, but no longer go to church. It is a meeting of ALL the Catholic community who come together to express their views on issues of concern, to share faith, and set a direction for a future of peace, justice, and mercy.

I have shared only three, but SO many things give me hope this Advent. I truly believe that the human family is moving slowly toward Christ’s Second Coming by doing the works of peace, justice, and mercy. 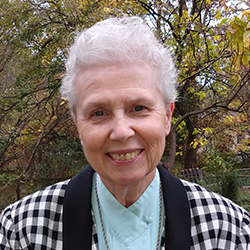 Jeannine Gramick is a Sister of Loretto, born and raised in Philadelphia, where she was educated in the Catholic school system, where she felt her call to religious life, and where, almost 50 years ago, she began a ministry to lesbian and gay people, which has transformed the Catholic Church in the United States and beyond.

In 1971, very few Catholics were talking about LGBT issues when Sister Jeannine, then a doctoral student in mathematics education at the University of Pennsylvania, met Dominic Bash, an alienated gay Catholic man who asked her, “What is the Catholic Church doing for my lesbian and gay sisters and brothers?” Sister Jeannine responded that she didn’t know, but she would find out.

She learned, of course, that nothing was being done for this community, so she decided to do something. She arranged home Masses, prayer services, and discussions for Dominic and his friends. Little did Sister Jeannine realize that she was pioneering a ministry that now reaches into countries throughout the globe.

In 1977, along with Father Robert Nugent, she established New Ways Ministry, an international Catholic ministry of justice and reconciliation for the LGBT community and the Catholic Church. Sister Jeannine continues her educational work with New Ways Ministry through public advocacy and has authored or edited more than a hundred articles or books.

Sister Jeannine has received dozens of awards from Catholic and LGBT organizations. Her outreach was the subject of the award-winning documentary, “In Good Conscience: Sister Jeannine Gramick’s Journey of Faith”.

A Vatican investigation of her ministry culminated in a 1999 order from the Congregation for the Doctrine of the Faith to cease her work. Her discernment led her to respond, “I choose not to collaborate in my own oppression.” In the political fallout, Sister Jeannine transferred from the School Sisters of Notre Dame to the Sisters of Loretto, who continued to receive letters from the CDF that Sister Jeannine cease her LGBT ministry or be dismissed from religious life. With the election of Pope Francis, the Vatican letters ceased.

A great supporter of Pope Francis, Sister Jeannine’s car has a bumper sticker that reads: “I (picture of red heart) Pope Francis,” and her computer is adorned with the sticker, “This Pope Gives Me Hope!”