Today, December 12th, we celebrate the Feast of Our Lady of Guadalupe whose importance, in Latin American countries in general and in Mexico in particular, is undeniable. A devotion that provided hope, solidarity and strength in response to the dramatic context of oppression, confusion and suffering caused by the conquest and the colony.

A figure that managed to be equally significant for natives, Spanish and Creole; and served as one of the most important symbols around which the Mexican identity was built, so much, that it worked as banner in the struggle for the independence of my country.

Under the shelter of the Guadalupana, a lot of Mexicans and Latin Americans have entrusted ourselves to her care, we have become stronger in our fights and we have sympathized with those most in need because we have accepted the mystery of God in our lives.

Indeed, precisely in the most important Marian feast for my people, I want to underline the human aspect of our Lady, because of the relationship and the meaning that this has or can have in the experiences and expressions of Catholics.

Thus, the reading of the gospel reminds us of two fundamental facts in the Christian experience. First, God's initiative to reach our lives, as it came to Mary more than two thousand years ago; second, the need for the human response to accept his offer to dwell among us. For this reason, the fiat of the Virgin is so significant that, despite the legitimate disturbance due to the weird message and recognizing that, behind the words of the angel, comes something until that moment unknown and confusing, she gives a sustained yes that transformed her life and the history of humankind.

Certainly, God loves us in such a way that he always searches for us, but only as a proposal, as a respectful constant invitation to receive from Him the life that he gives us with full hands, but indeed that depends on our free will to materialize that transformation. Therefore, it is up to us and ourselves to accept the grace that comes from Above and allow it to grow in our core and to be delivered to the whole of humanity, without distinction, exclusion or petty favoritism, and preferably for those most in need for their conditions of oppression, injustice and suffering.

Although, the Father has already given us salvation through the Son in the Holy Spirit, it needs to be fulfilled through men and women who, recognizing in ourselves the wonders that God has done in our stories, we commit ourselves with the physical, social, economic and cultural spaces in which we live, especially with the life and future of the less favored

The experience of recognizing and accepting that the mystery of God lives among us is a source of joy as affirmed by the reading of Zechariah, a joy that is necessarily communal and historical, that touches our lives, that humanizes our existence, that pushes us to be there for others without denying our own happiness; joy which we celebrate especially on this day in the manifestation of the Guadalupana in Latin lands and that is present in us and in everyone who invokes and recognizes her as a loving mother who cares, protects and inspire us.

To avoid childish triumphalism, the Revelation reading reminds us of the need to be always alert. Even-though Christ overcame evil, this is always setting traps, with its disguise of success, power and wealth; with the fear and uncertainty that it produces, with its important capacity for destruction and with its eternal desire to prevent God's presence and project from being achieved in history. Evil that manifests itself in those excluded from the globalized world, in the victims of sexual abuse and human trafficking; in those expelled from their countries because of war, insecurity, injustice and lack of opportunities.

Sisters and brothers, on this Feast of Our Lady of Guadalupe, I invite you to allow, as the Virgin did, that the love of God germinates in each one of us, emerge in our relationships, give strength and meaning in human history and transform the culture of death to a full living space for everyone 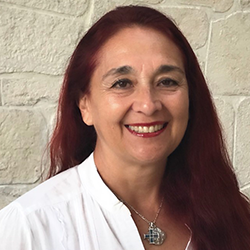 Jutta Battenberg Galindo is Professor of Theology at the Universidad Iberoamericana (UIA) and at the Franciscan Institute of Philosophy and Theology (IFFT) of the Province of the Holy Gospel in Mexico City since 2006. She is also director of the Center for Human Development and Spirituality Domus Vitae, AC.

She earned her doctorate degree in Theology at the Pontificia Universidad Javeriana in Bogotá, Colombia. She holds a master’s degree in Educational Awareness with a Gestalt approach and specialized in human development and Gestalt Psychotherapy at the Humanistic Institute of Gestalt Psychotherapy (IHPG) in Mexico City and holds a bachelor's degree in Theological Sciences from the Universidad Iberoamericana (UIA) in Mexico City.

As a specialist in Human Development, Gestalt Psychotherapy, and Theology, she is a regular guest on radio and television, as well as facilitator of human development workshops especially for women, vulnerable groups, and religious, mainly in rural areas and urban peripheries, as well as dedicating herself to psychotherapeutic practice.