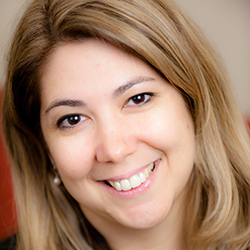 Messina is the Associate Professor of Religious Studies at Ursuline College in Pepper Pike, Ohio where she formerly served as Dean of the School of Graduate and Professional Studies. Prior to her time at Ursuline College, she served as the Director of the Center for Women’s Interdisciplinary Research and Education (WIRE) at Claremont Graduate University and as a Visiting Professor of Theological Ethics at Loyola Marymount University.

Messina is the co-founder of Feminism and Religion, a project that explores the intersection between scholarship and the “F-word” in religion, community, and activism now with readers in 181 countries. And also the founder of its sister project, The Far Press, an indie feminist publisher focused on releasing books that explore feminism and gender, religion and spirituality, politics, and social change.

Messina has authored articles in a variety of publications and regularly writes for The Huffington Post. She is the author of Rape Culture and Spiritual Violence (2014), and Jesus in the White House: Make Humanity Great Again (2017). She is also co-editor of the highly acclaimed Faithfully Feminist: Jewish, Christian, and Muslim Feminists on Why We Stay (with Jennifer Zobair and Amy Levin, 2015) Feminism and Religion in the 21st Century (with Rosemary Radford Ruether, 2014), and Women Religion Revolution (with Xochitl Alvizo, 2017).

Messina is a regular speaker around the US at universities, organizations, conferences, and in the national news circuit. She has appeared on Tavis Smiley, MSNBC, and NPR and took to the TEDx stage with her talk, “The New Feminist Revolution in Religion.” She has also spoken at the Commission on the Status of Women at the United Nations.

Messina earned her doctorate at Claremont Graduate University, focusing on women studies in religion, theology, ethics, and culture. She completed a Master of Arts in religious studies at John Carroll University. She also earned a Master of Business Administration with a dual focus in organizational leadership and marketing at the University of Findlay and completed her undergraduate degree at Cleveland State University.

Messina currently resides in Cleveland, Ohio (or Believeland as she calls it) with her budding feminist daughter and their feminist chihuahua.

…being 'all in' is rare - it is challenging and a great risk that many of us are not willing to take…what we can do is wake up every morning and acknowledge our position in the world, our abilities to contribute to positive social change, and do our best to make that happen. We are not always going to be successful; but it is our intention that matters.