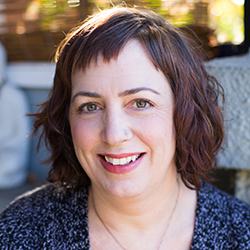 Kaya Oakes teaches nonfiction writing at the University of California, Berkeley. She is the author of four books, including Slanted and Enchanted: The Evolution of Indie Culture (Henry Holt, 2009); Radical Reinvention: An Unlikely Return to the Catholic Church (Counterpoint Press, 2012); and The Nones Are Alright: A New Generation of Seekers, Believers, and Those In-Between (Orbis Books, 2015). Her writing has appeared in America, Commonweal, Slate, The New Republic, Foreign Policy, The Guardian, Narratively, Religion Dispatches, Religion News Service, National Catholic Reporter, and many other publications. She was born and raised in Oakland, California, where she still lives.

Our newness might look like this: that we might speak, and be believed, instead of being dismissed...That we might get, for the first time, to tell our own stories, instead of having them told.