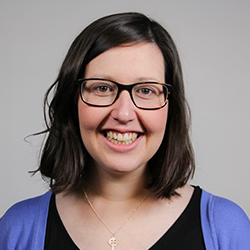 Kerry Weber is an executive editor of America, where she has worked since 2009. She is a co-host of "America This Week,"a weekly radio program on SiriusXM 129, The Catholic Channel. Kerry is the author of Mercy in the City: How to Feed the Hungry, Give Drink to the Thirsty, Visit the Imprisoned, and Keep Your Day Job(Loyola Press), which received a 2014 Christopher award, as well as awards from the Catholic Press Association and the Association of Catholic Publishers. Her writing and multimedia work have earned several awards from the Catholic Press Association, and in 2013 she reported from Rwanda as a recipient of Catholic Relief Services' Egan Journalism Fellowship recognizing excellence in the Catholic media.  She is a graduate of Providence College and the Columbia University Graduate School of Journalism. From 2004-2005 Kerry volunteered through the Mercy Volunteer Corps as a special-education teacher on the Navajo reservation in St. Michael's, Arizona. She has been a Mercy Associate since 2012. She a board member of the Catholic Press Association and of the Ignatian Solidarity Network.

We’re simply asked to do what families do, which is sacrifice for each other. We work late nights to support each other; we give up jobs to be with each other; we look away from our screens; we clean up after each other, we laugh, we sit in silence, in sorrow, in solidarity with each other. And we do this with the aim of modeling the love of Christ, who sacrificed his life for all of us.