Rules!  I have been known to break them. In fact, becoming a Catholic feminist theologian feels like one long journey of breaking rules.

Perhaps that is why I have always struggled with today’s Gospel text in Mt 5: 17-37.

After the description of Jesus’ ministry starting in chapter 4, Matthew’s gospel in chapter 5 depicts Jesus in front of a crowd with the disciples, laying out what probably appears to the crowd as “new teachings”. The passages, including the Beatitudes and comparison of Salt and Light paint, a picture of suffering and deferred reward. By the time we reach the Law of the Prophets, Jesus is keen to remind the crowd and disciples that these are not NEW teachings.

As Jesus says in verse 17, he did not “come to abolish the law or the prophets . . .  but to fulfill.” Our first reading from Sirach also reinforces the message that following the commandments is the path to God’s favor. [Some interpretations of this Gospel passage are anti-Jewish when read as Jesus being the fulfillment of the law and prophets and establishing a new law.  Jesus does not say anything about establishing a new law.]  Jesus proceeds to detail what he means regarding “fulfillment” by using a few commandments as examples.

Like Jesus, let’s take some examples related to the commandments. I recently returned from El Salvador, celebrating the legacy of, now canonized, Saint Oscar Romero. In the face of State exploitation and brutality, he spoke up for the powerless when many other Church leaders stayed silent or even supported the military. There were others at the time who sought to fight back lest they also be killed like Romero. Many of their friends and family members were murdered or disappeared.  As citizens seeking to take back their lives, they took up arms in a civil war. They broke the commandment: Do not kill.  Some ask, “Is self-defense killing? Or what does one do when there are no options left?” Do we make exceptions for this commandment and on what basis?

What about observing the Sabbath? For example, Jesus’ healing of the blind man happens on the Sabbath and breaks purity laws. Jesus touches the blind man – someone deemed unclean as blindness was a mark of being born carrying a sin of his parents.  This might be construed as work on the Sabbath which is forbidden by the codes as well.  Afterward, the Pharisees are upset by Jesus’ healing of the blind man, they question the man and proceed to throw him out of the temple.  In response to the Pharisees, Jesus suggests that they are sinful for not “seeing” the real meaning of the law and need for healing (John 9:39-41). In this statement similar to other passages in the Gospels, Jesus suggests that those who enforce the purity codes for the sake of enforcement with no acknowledgement of the context are “blinded” and not seeing clearly. [Portions of this section are adapted from the youth study on purity codes, “What does it mean to pledge sexual purity” by Kate Ott]

What about lying? The 8th commandment seems direct and unequivocal in its stance toward lying; the rest of the Bible texts are not as clear cut.  There are numerous passages that suggest that people should be honest in their speech (Mt. 5:37), put away falsehoods (Eph. 4:25), and that God detests lying (Proverbs 12:22).  Other passages show God telling prophets to lie in order to carry out their work (Ex. 3:18, 1 Samuel 16: 2).  In other cases, figures are rewarded after lying such as Rahab who hides the Israelites in Jericho (Joshua 2: 1-16).  Jesus himself is depicted as lying to the disciples about going to a feast (John 7:2-10).  It might be more accurate to say that lying is tolerated or understandable in service of a good intention? For example, Rahab’s intention of saving the Israelites and her family is deemed faithful, even if she had to lie to do so.  Here we might say, the intention is not to lie but to save the Israelites.  Some ethicists call this the principle of double effect. [Portions of this section are adapted from the youth study “Is Lying Ever Okay” by Kate Ott]

Jesus’ interpretation is more comprehensive than a legalistic reading of commandments. This is what we might in ethics call focusing on the “spirit” of the law. In fact, Jesus is specifically calling the crowd to discern the meaning of the commandments for themselves. The religious authorities are not the final arbiters or even correct in their interpretation. Jesus remarks, “unless your righteousness surpasses that of the scribes and Pharisees, you will not enter the kingdom of heaven.” [Mt 5:20]  To Jesus’ call for greater discernment and attention to the spirit of the law as I’ve called it, Paul’s reminds the community at Corinth in our second reading from 1 Cor 2, that we need to continually seek wisdom and listen for the Spirit as God’s work is not is not yet fulfilled.

This reminds me of MLK Jr.’s response to those who criticized him for breaking laws during his non-violent protests against white racism.  In his Letter from a Birmingham Jail, drawing on St. Augustine, he writes:

One may well ask: ‘How can you advocate breaking some laws and obeying others?’ The answer lies in the fact that there are two types of laws: just and unjust. I would be the first to advocate obeying just laws. One has not only a legal but a moral responsibility to obey just laws. Conversely, one has a moral responsibility to disobey unjust laws. I would agree with St. Augustine that ‘an unjust law is no law at all.’

The racist laws and practices that King and those in the civil rights movement sought to overturn were unjust. Throughout history, those with power have established and enforced laws, rules, even claimed they were fulfilling the commandments at the expense of the powerless.

How do we follow Jesus in fulfilling the law and the prophets?  For example, should a child who is experiencing sexual, emotional, or physical abuse by a parent stay silent so as to not dishonor their father or mother?  Of course not!  Speaking the truth about abuse in families, even church families, is necessary.

As the gospel reading ends with Jesus’ saying, “Let your ‘Yes’ mean ‘Yes’ and your ‘No’ mean ‘No’” (Mt. 5:37), we must remember: ethics – rules and commandments – are not lived in a philosophical abstraction. Jesus reminds us that following the law and the prophets is difficult work, in need of discernment, open to the Spirit, and guided by integrity. Even though we often fail to fulfill the law and prophets intention, we must continue to strive toward that work with a spirit of love and welcome. As our gospel passage ends, Jesus continues in Matthew 5: 38 reminding the crowd and disciples to love their enemies and greet the stranger. 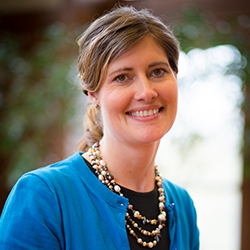 Dr. Kate Ott is a feminist, catholic scholar addressing the formation of moral communities with specializations in technology, youth and young adults, sexuality, pedagogy and professional ethics.  Her newest book is Christian Ethics for a Digital Society. Her other books include: Sex + Faith: Talking with Your Child from Birth to Adolescence and two co-edited volumes in addition to multiple book chapters and articles. She lectures and leads workshops across North America on technology and sexuality issues related to faith formation for teens, young adults, parents, and religious educators and professionals. She is Associate Professor of Christian Social Ethics at Drew University Theological School in Madison, NJ and a Lecturer in Practical Theology at Yale Divinity School in New Haven, CT.