Who are your enemies?

Doris Hernandez lost her son Freddie seven years ago, when he was shot and killed on the streets of Chicago by an unknown assailant. By anyone’s standards, her son’s murderer is now her enemy, and it would be perfectly reasonable for her to wake up each morning filled with a burning desire for justice. And she does, but not the kind of justice one might imagine.

Twice a month, Doris sits with us in a circle at Kolbe House with families who have loved ones incarcerated. Mothers talk about their sons being accused of horrific crimes--even murder.

When Doris speaks, her message always centers on one thing: love. With her love for Freddie, she has opened her heart to all who are affected by violence, including those pulling the trigger. She has come to think of them--including her own son's murderer--as her own children. She is building a higher justice--one that seems more in line with God’s plan for humanity.

It is this justice that Jesus illuminates in this week’s Gospel. He begins by calling out the old law of an eye for an eye, a tooth for a tooth. To modern ears the old law sounds like an extremely harsh system of punishment, but we misinterpret. It was actually a guide to make sure that punishments were proportionate to the wrong committed, not in excess. It was a reasonable way to administer consequences to laws broken.

But in this Gospel passage, Jesus is calling us to go deeper than reason: turn the other cheek, walk two miles, give not just your outer garment but your inner garment, as well. With these three examples, Jesus is not calling us to roll over and be used by our enemies. Rather, He is calling us to love. He is calling us to radical, creative, nonviolent, love that strips the oppressor of control, restores the dignity of the one oppressed, and opens the door for a transformation of the relationship.

We are all called to apply this approach in our everyday lives, to love those who we consider to be our personal enemies. But we can also apply it to structures in our society, especially the structure of incarceration. In the United States, incarceration has become the go-to punishment used to keep those we have judged to be enemies out of our communities.

How can we apply Jesus' vision of justice to criminal justice and incarceration? Beyond addressing gross injustices in the current system, especially against people of color, responding to Jesus' call would completely transform that way justice is administered in our communities.

A growing consensus around the world--including within the Catholic Church and here at Kolbe House--are promoting a philosophy known as restorative justice. Restorative justice shifts the central focus of justice from punishment to healing. Healing means that the justice process cannot be dedicated to punishing those who have done wrong, but must be grounded in an understanding of the harm caused, so that consequences can be carefully agreed upon to address that harm.

Restorative justice also emphasizes the importance of the community, meaning we all have a role to play.  Peace circles, restorative courts, building relationships with those affected by incarceration, including families and those who have completed their sentences, even changes in the way we talk about people who have committed crimes as if they were villains-- these are some places to start. These are tools that can involve the accused, victims, families, and community members in dialogues that lead to accountability, healing, and safer, healthier communities.

This approach to justice comes closer not only to what Jesus envisions, but also to the law given to Moses in the first reading, not to seek revenge but rather to love, to transform enemies into neighbors.

This justice practices the kindness and mercy of God expressed in the psalm.

This justice leans towards the Godly “foolishness” that St. Paul calls us to in the second reading. It is this foolishness that empowers a grieving mother to act out of love for her son’s murderer, empowers us to walk two miles and turn the other cheek.

Yes, Jesus is calling us to a higher level of justice--one that goes deeper than reason, one that lights our hearts on fire with a love that allows us to look at an enemy and see instead a brother or sister. 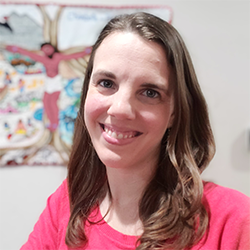 Emily is a married layperson with two young children. She is Coordinator of Outreach and Formation with Kolbe House Jail Ministry of the Archdiocese of Chicago. In this role, Emily is responsible for parish outreach and education, ministry to families affected by incarceration, and formation of volunteers participating in faith-based accompaniment ministry in Cook County jail. She entered this ministry after being introduced to restorative justice through a practicum accompanying youth in juvenile detention with Precious Blood Ministry of Reconciliation and learning from her husband’s incarceration experience as a Mexican immigrant.

Her past professional ministries include parish family faith formation in Chicago and youth and children’s ministry as an Incarnate Word Missionary in Chimbote, Peru. Both ministries informed her current passion for developing parishes as primary sources for relationship and community development. She earned an MA in Intercultural Ministry from Catholic Theological Union and a BA in Economics and Journalism from Creighton University.