One of the things that I decided to “give up” for Lent this year was social media. I’m not on Instagram, SnapChat or TikTok so that wasn’t so difficult, but I was a regular on Twitter and Facebook. My reasons had to do the way both platforms have become an open invitation for the “takedown”, of focusing on one thing, and rallying around a public shaming with the most clever comeback in 240 characters. Of course, you could use it for staying in touch with family and friends, or learning about breaking news without turning on the television. Still, the temptation to participate in the downward spiral of negativity has often overshadowed its more positive uses, so I just shut it all down.

I share this because I couldn’t help but think about the way John’s Gospel story of the scribes and Pharisees trying to create a “gotcha” moment for Jesus has been read and re-read, interpreted and reinterpreted, as a story only about a woman taken in for adultery. This is one of those gospel stories that takes on a life of its own, with elements passed down that aren’t in the story, like Jesus writing the sins of all those gathered into the dirt with his finger, when only part of that – Jesus writing in the dirt with his finger – is actually in the text.

I’m struck by the way our interpretive imagination (or lack thereof) has assumed that what the scribes and Pharisees claim is true – this is a woman caught in the act of adultery – and she deserves the shame of being dragged to the temple, placed in the middle of a crowd of people, and condemned to the death.

And based on our belief in that assumption about this unnamed adulterous woman, we have read the story as one of human sinfulness and divine forgiveness, of the grace that transcends judgment and condemnation, a morality tale of what not to do – don’t commit adultery, don’t condemn others – of “go and sin no more.”

I hear something very different in this story.

I’m struck by the timing of this story, not long before Jesus – an innocent man – would be handed over to the Roman authorities on false pretense, to die a shameful death reserved for the “criminal” in a very public fashion, to terrorize others to stay in their place. He had just spent the night on the Mount of Olives before coming back to the temple in the early morning to teach the people.

I’m struck by the fact that the only ones who accuse the woman of adultery are the men – scribes and Pharisees – who are also trying to entrap Jesus with his response. Jesus is the object of their scorn and displeasure; the woman is the objectified means to a calculated end.

What if she were to speak earlier on in the story? Would she say that she had not done what she was accused of doing? Would she have been believed?

She was caught “in the act” but where was her partner who, according to the law, would be condemned to the same death?

As I consider these questions, the story is opened up to us as a radical reimagining of power and privilege, of women’s subjectivity against a world of objectification, and of Jesus’ accompaniment and solidarity.

In this telling, I can’t help but think about the women dragged into the square for a public shaming in our own day, based on assumptions of their sexuality, how women of color, or trans women, for example, are hypersexualized in our society, portrayed in ways that underscore the supremacy and purity of white women to the inferiority and “sinfulness” of black and brown women’s bodies. And the extent our society will go to protect that dichotomy.

In this telling, I can’t help but think about women caught in the wars waged by men, used as objects to take other men down, in their vying for power. And we know how rape is often used as a weapon of war.

How is it scandalous to say that Jesus enacts no punishment, no condemnation, for an “adulterous” woman, that he just lets her go; yet not scandalous that the religious power structures of the time could have accused an innocent person, condemning her to death, just to prove a point?

What responsibility do we have in undoing the systems and structures that make it all too easy to drag a vulnerable person to the middle of the square to be stoned for all to see and participate? Do social media platforms serve as our 21st century public venue where assaults and accusations abound?

I worry that our shame about this story has been misdirected.

As we journey through these final days of Lent, I pray we have not become so desensitized to the harm done by powers and privilege, because we are so much more focused on shaming the “sinner” rather than dismantling the structures that make such shaming all too easy.

The words of Isaiah remind me that God makes possible the seemingly impossible; this is a God who, in the African-American spiritual tradition, “makes a way out of no way.”  Our God refuses to participate in the shaming, objectification and trickery; our God honors the humanity of those who the world would shame.

Their stories are strikingly similar to me, Jesus and the woman accused of adultery. The scandal exists in the manner they were treated by men in power, so ready to be sacrificed for the supremacy of their systems, religious and legal. Maybe we, too, are complicit in the scandal if we choose to read from the story only Jesus’ response toward a “sinful” woman. In taking a step back, perhaps we can see the scandal of the bigger picture and, without judgment or condemnation, work toward the prize of God’s upward calling. 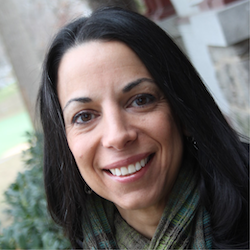 Teresa Delgado is Director of the Peace and Justice Studies Program and Professor and Chairperson of the Religious Studies Department at Iona College (New Rochelle, NY). She received her doctorate from Union Theological Seminary in New York City, under the guidance of the trailblazing womanist theologian Dr. Delores S. Williams. She has published on topics ranging from diversity in higher education, transformational pedagogies, constructive theology and ethics, and justice for racially, ethnically and sexually minoritized persons, including her essays, “Metaphor for Teaching: Good Teaching is Like Good Sex,” (Teaching Theology and Religion, 18.3 July 2015) and “Beyond Procreativity: Heterosexuals Queering Marriage,” in Queer Christianities: Lived Religion in Transgressive Forms (NYU Press, 2014). Dr. Delgado’s book, A Puerto Rican Decolonial Theology: Prophesy Freedom, was published  in September 2017 (Palgrave Macmillan); co-authored with Dr. Victor Anderson (Vanderbilt University), “For the Beauty of the World: The Moral Imaginary of Martin Luther King, Jr.’s World House,” is included in Reclaiming the Great World House in the 21st Century: Cross-Disciplinary Explorations of the Vision of Martin Luther King, Jr. (Vicki L. Crawford and Lewis V. Baldwin, eds. Athens, GA: University of Georgia Press, 2019). Her poetry, “Summer Solstice,” is included in the collection Unruly Catholic Feminists: Prose, Poetry, and the Future of the Faith (Jeana DelRosso, Leigh Eicke, and Ana Kothe, eds. New York: SUNY Press, 2021). She is working on a manuscript in sexual ethics, Loving Sex: A Decolonial Theology of the Body.

Addressing the need for greater diversity, equity and inclusion in theological education, Dr. Delgado mentors doctoral students of color in theology and religion to nurture their success in the academy, church and world. A Senior Fellow of the Ford Foundation, she has served on the board of the Hispanic Theological Initiative; as well as a member of the mentoring consortium of the Forum for Theological Exploration; and the advisory committee of the Wabash Center for Teaching & Learning in Theology and Religion. Dr. Delgado served two terms as President of the Board of WESPAC (Westchester People’s Action Coalition), a leading force of social justice activism in Westchester County, and currently serves as a member of the Board of Trustees of Colgate University and The Ursuline School (New Rochelle, NY).   She lives in Mount Vernon, NY with her husband, Pascal Kabemba, with whom she is blessed to have four beautiful (adult) children.