Today, the 2nd Sunday of Easter, celebrated as Divine Mercy Sunday, invites us to relish God’s mercy and share it with all people of God irrespective of caste, class, creed, colour and sex-gender prejudices prevalent in many developing countries like India and developed nations as well. We have ample statistical evidence for the increasing instances of violence against human beings, in particular those on the periphery and against Mother Earth and her resources across the globe. Mercy Sunday challenges us to be ambassadors of God’s mercy in a world that seems to have lost the values of compassion (karuna) and love.

Against this background, we do well to explore the biblical meaning of the word ‘mercy’ and its nuances. Eerdmans Dictionary of the Bible[1] describes ‘mercy’ as the compassionate disposition to forgive someone or help someone in need. Closely connected are such concepts as grace, goodness, love, loving-kindness, compassion and patience. The Hebrew word for compassion rahamim expresses the feminine aspect of God. According to Semitic thought, the word conveys the “instinctive attachment of one being for another”, thus indicating that it has “its seat in the maternal bosom, raham: 1 Kings 3:26.”[2]

Let us now look at today’s Liturgical readings.  What do we find in the first reading from Acts 4:32-35? A community of believers that shares everything in common with no one in want. What a marvelous lesson for some of the rich and powerful people of this world, who continue to accumulate wealth even at the expense of the poor and needy! According to World Bank statistics, globally 746 million people live in extreme poverty with the African continent having the largest number, 383 million, followed by Asia with 327 million. India has 218 million living in this condition...[3] In Misericordiae Vultus (The Face of Mercy), Pope Francis condemns “violence inflicted for the sake of amassing riches…”(no.19). He also underlines the relationship between justice and mercy (no. 20).

Contemplating today’s Gospel scene (Jn 20:19-31), we cannot but admire Jesus the compassionate Master, who both befriends/confronts and simultaneously liberates (v.27) his doubting Thomas, leading to Thomas’ proclamation of faith, “My Lord and my God” (v.28). Indeed Jesus reveals the merciful face of God by his very life and mission.

Keeping Mercy as the focus, I would not limit my reflections to today’s readings alone, but take liberty to draw your attention to a heart-warming episode during Jesus’ public ministry. It is the story of the ‘Bent Woman’ unique to Luke’s Gospel (Lk 13:10-17), regarded as a paradigm for women’s liberation from all forms of bondage.

In the first part of the story, set in the context of Jesus’ synagogue teaching, his compassionate gesture towards the bent woman brings her from the periphery to the centre.    Upon seeing her, Jesus calls her over and says, “Woman you are set free from your ailment” (v. 12). Instantly the crippled woman stands up straight and glorifies God. This nameless woman’s 18 years of suffering have become symbolic of the suffering of women down the ages under patriarchy and its sexist ideologies and practices. You are encouraged to read my article for an exegetical analysis of the text.[4]

The second part of the story (vv.14-17) ends up in a conflict between Jesus and the law-abiding synagogue leader, who is indignant that Jesus has healed on a Sabbath (v.14). The focal point of the episode is Jesus’ life-affirming interpretation of the Sabbath law. Jesus in effect is challenging his hard-headed male audience for its obsession with scrupulous observance of the law at the expense of mercy and compassion towards the needy. After all, “The Sabbath is made for humankind and not humankind for the Sabbath” (Mk 2:27).

Jesus and the Bent Women of Today

Society: We can find a striking similarity between the plight of women in Jesus’ time and that of women today. Several factors – social, cultural, religious, political, economic and sex-gender stereotypes, including women’s passive resignation – continue to keep women in general and Indian/Asian women in particular, in a crippled situation. It is a fact that marginalized communities like the Dalits, Adivasis and sexual minorities are the worst hit victims of violence and injustice.

The Church: Just as patriarchy pervades all areas of a woman’s life in society, so too Church structures and doctrines control and domesticate Christian women. The Catholic Church is no exception. Despite the gracious attitude of Pope Francis towards women (see Evangelii Gaudium[5]), the institutional Church is rather reluctant to break the ‘unbroken’ tradition of an all-male Church leadership with its androcentric biblical-theological articulations, and portrayal of God in exclusively male categories. Because religious patriarchy considers itself to be divinely ordained, women by and large, have succumbed to the sin of passivity and choose to remain under a ‘benevolent patriarchy’.

Regrettably, the official Church’s position on women is riddled with ambiguities and inconsistencies. While women constitute the large majority of active members and are the sustaining force, in a male-dominated Church, women are always at the receiving end, virtually having no power within its structure. They have been given their ‘appropriate role’ and are expected to function within the prescribed parameters.

Nevertheless, women do recognize the empowering teachings of Vatican II on women’s dignity and vocation, and subsequent pronouncements by Popes and Bishops. Special mention should be made of the Gender Policy of the Catholic Church of India, aimed at addressing “the concerns of women, who are doubly marginalized and oppressed” and promoting the “egalitarian message of Jesus, with the vision of collaborative Church with Gender Justice.”[6]

The best way to conclude our reflections is to recall the words of Jesus “Woman you are set free” (Lk 10:12). With this solemn declaration, Jesus cuts through all canons of Jewish male chauvinism.  Adopting an attitude of critical discernment towards the existing socio-religio-cultural customs, laws, economic and political powers of his day, Jesus denounces all oppressive forces and announces a new social and religious order (cf. Mt 5:1-12; Lk 6:20-26).

Just as Jesus saw the crippled woman (v.12), he sees the ‘bent’ condition of both women and men, victimized by patriarchal prejudices in many communities in today’s Church and society.  In his compassion, Jesus is inviting all of us, women and men, to join hands together to resist sinful structures that restrict our full participation in the life and mission of the Church and Society.

Let our celebration of Mercy Sunday be marked by our renewed faith in Jesus, the Prophet-Liberator and commitment to his mission (Lk 4: 18-19), and thereby function as powerful witness and spokespersons of God’s merciful love in favour of the voiceless and marginalized people and the whole creation.

[6] Published by CBCI Commission for Women &  CBCI, New Delhi, 2010. The quotes are from the “Foreword”. With a view to “promoting awareness and implementing the ideas and principles contained in the document,” Streevani has published a book titled Gender Justice and Catholic Church: Beliefs and Behaviours – A Scientific Study, 2014. 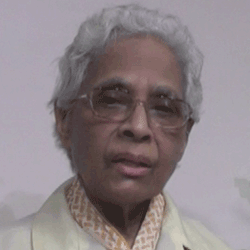 Pauline Chakkalakal, Daughters of St. Paul (dsp) holds a Doctorate in Biblical Theology, besides Diplomas in Philosophy, Library Science, and Journalism & Public Relations. She is a member of Indian Theological Association (ITA), Catholic Biblical Association of India (CBAI), Society for Biblical Studies, India (SBSI, an Ecumenical Bible Scholars’ Forum), Indian Women Theologians' Forum (IWTF), Satyashodhak, a Mumbai-based Feminist Collective, Ecclesia of Women in Asia (EWA) and had been an active member of the Ecumenical Association of Third World Theologians. She is associated with a few secular and church-related Women’s organizations and People’s movements.

Pauline has to her credit a few books and over a hundred Articles published in various Journals and Books on Biblical-Theological themes, Interfaith Partnership and other current topics from feminist (meaning egalitarian, inclusive & contextual, not extremist) perspectives. She is actively engaged in Women’s empowerment programmes, Interreligious and Ecumenical ministries.

Served as Resource person at National & International Conferences through Paper presentations on Biblical-Theological and Interreligious themes with special reference to Indian/Asian realities;

Conducted Seminars for Ecumenical scholars on Jesus Christ in the Context of Religious Pluralism at YMCA, Mumbai and for Bishops & Provincials (women & men religious) at their joint meeting in Patna on Partnership in the Mission of the Church

Served as Secretary of the Conference of Religious India (CRI), Bangalore Unit;

Currently she is on the Executive Committee of Mumbai CRI Unit.

Presently, besides writing Research Papers, Pauline takes up some of the above-mentioned activities.