We are now surrounded by the joy and beauty of the Easter season. Where I live, in the Bay Area, the air is filled with the lovely smell of flowers, and new green leaves dance in the gentle wind.  Moments like these remind me of today’s responsorial psalm, “sing a new song to the Lord.”  The swaying leaves look like they are singing a new song to the Lord. Maybe, we should also sing a new song about our lives in the midst of the paschal mystery of hope. In the Gospel for this Sunday, I am struck by many familiar words, such as: “love one another,” “I have called you friend,” and “remain in my love.”

These words are beautiful and powerful in describing our faith and our personal God. If I had to choose one phrase to represent my faith, I would certainly choose one of these.  But at the same time, these words are so familiar that sometimes they can almost sound like clichés. We have all surely heard these words hundreds of times.

That is why these powerful words can come across as almost flat. According to linguistic studies, when expressions are repeated too much, they can become stale or even dead, because there is no aspect of fresh or unexpected tension to create beauty or a vivid sense of meaning.

So how can we read these passages so that we can continue to be inspired and receive something unexpected?  I believe that, when we read the text, we should carefully consider the given context, imagine the life of the early Christian church, and face our lives honestly, in all its instability and uncertainty. in that way, these passages can be re-ignited and can retain the power to transform us.

We know that the New Testament, and the Gospel in particular, was written in the light of resurrection and in the midst of the early Church movement. The reason why I use the word “movement” is because there really is no such thing as one clearly defined “early church.”  Rather, the church has always been moving, always changing, and always becoming.

Before we go into the text, imagine what happened to the lives of the disciples. The disciples, who had innocently fallen in love with Jesus, physically stayed with him until he died. This all sounds very simple. Yet, if I put my life within this frame, it would not be simple at all.  Such an event could be life changing, shocking, or even traumatic, watching the death of a teacher.  And then, at the point when the disciples experienced the resurrection of Jesus and their own transformation in receiving the Holy Spirit, I can imagine how overwhelming the experience probably was. Even beyond happiness and excitement!  Actually, it was probably The moment when they began to reflect on how they had met Jesus and what their friendships with him meant. And most importantly, who Jesus was.  At that moment of great transition and transformation, the disciples must have remembered what Jesus said to them: “remain in my love.”

We can easily sense that these words were not casual. When Jesus says, “ I call you friend,” according to the scripture narrative, “Jesus knew that his time was coming and he decided to wash feet.” His tone must have been solemn and sad. In John’s Gospel, the word, “remain” (in Greek, meno), which is translated as “abiding,” “belonging,” or “dwelling,” was an important word that was used more than 30 times.

In chapter 15, the phrase “remain in my love” sounds almost cozy, indicating an intimacy among friends. However, soon these words would challenge the disciples, because the words would no longer indicate physical belonging or intimacy.

They could have reflected on the words “remain in my love” within an atmosphere of fear and disappointment over the Cross.  The disciples could have remembered those same words when they were confused and perpléxed by the resurrection. It must have been scary because no one at that time really understood what the resurrection meant. Who knows that the most challenging moment for remaining in his love would be when they experienced his resurrection?  ….. Or the moment of receiving the Holy Spirit?

Sometimes, we are OK being sad and frustrated, but not OK in moving onto an unknown terrain, including joy and excitement.  Moving on is challenging because it requires us to expect the unexpected. Often, we read the Bible to gain a sense of security.  However, the message of Jesus is contradictory, instead, challenging us to open up to a new reality. If we read the Bible as a way to keep ourselves secure and unchanging, its words have no meaning.  So I wonder if, maybe, we choose to understand the passage as dead or uninspiring, so that we do not have to challenge ourselves—to face the unfamiliar.

Paradoxically, “remain in my love” does not mean to stay, but rather to leave for the unknown. The first reading, which comes from the Acts of Apostles, demonstrates that the early Christian community grew through boundary crossings. It is a good example of  “remaining in his love.”   The disciples who experienced the resurrection were forced to cross their own limitations and embrace new things, beyond their imaginations and frameworks.  Here, the only task is to be passive, to tune in, and to follow the directions of the Holy Spirit, which is often the very spirit of listening and discernment.

We hear that Peter crossed his cultural and religious boundaries with a discerning spirit.  As a Jewish man, he visited Cornelius, who was a Roman soldier. This story is crucial for the Book of Acts, in that the disciples in Jerusalem recognized that the Gospel was also for gentiles. This is the main thesis of the Book of Acts.[1] The disciples had to admit new communities that were beyond their own cultural norms and comfort. They had to acknowledge that the growing community was not simply a copy of the existing Jewish community.  They were, no doubt, surprised that the Holy Spirit was poured onto un-baptized foreigners. We humans generally like to rely on order and patterns, because they give us a sense of security.  However, the situation with the disciples was like a free spirit, and Peter discerned the situation and continued to open up to the new reality, rather than trying to control and manipulate it.

Therefore, ironically, we must admit that “remaining in his love” means going to an unknown land and people, or going to an unfamiliar people or cultures, with discerning and open spirits.  When all kinds of cultural boundaries cross, the activity of the Holy Spirit will be manifest. And when we embrace all kinds of unexpected reality, we can then sing a new song to the Lord.

Like a tree which gives up all things, only to then experience new leaves budding, we are standing in our faith, desiring a new song to emerge from our everyday life.  We are bound by our limits and daily tasks, but we still hope to sing a new song to the Lord by remaining in his love.  In the spirit of discernment and listening, when we dare to cross boundaries and to embrace the stranger or the unfamiliar, we can remain in love of Jesus. And we can make a fresh new song to the Lord. 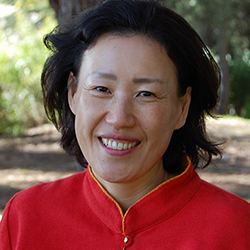 Jung Eun Sophia Park, SNJM, is Associate Professor of Religious Studies and Philosophy at Holy Names University in Oakland, California.  She earned a PhD in Christian Spirituality from the Graduate Theological Union in Berkeley, California. Along with teaching undergraduate students, she serves as a spiritual director with those who experience immigration and dislocation, as well as those who are exploring new ways of crossing cultural spirituality. As a scholar, spiritual director, a person of hybrid cultures, and a Holy Names sister, her publications embrace a wide spectrum. She authored Dislocation as Experience: Constructing a Hybrid Identity Creating a Borderland Space (New York: Peter Lang, 2010) and Border Crossing Spirituality: Transformation in Borderland (Eugene, OR: Wipf Stock, 2016).  Reflecting on her twenty years of spiritual direction and retreat ministry with women in Korea and the US, she published, Beauty of the Broken 부서진것의아름다움 (Seoul, South Korea: Marianist, 2015), and Considerate Chat: How Women Experience Transformation through Storytelling 사려깊은수다: 여성은이야기를통해어떻게성장하나 (Seoul, South Korea: Yellow Bric, 2016) in Korean.  Through her lens of intercultural encountering and transformation, Sophia has written on cross spiritual direction and religious life including, “Cross Cultural Spiritual Direction: Dance with a Beast,” in Presence and “Religious Life as Border Crossing,” in New Theology. She is currently preparing a new book, Frames of Emerging Religious Life in the US, written from a global perspective with Sr. Tere Maya, President of LCWR.  As a part of her teaching course, Social Justice and Spirituality, she travels every year for spring break with her students to Tutwiler, Mississippi, a mission area of the Holy Names Sisters for a Habitat for Humanity project. She also continues to research her topic of liminal space through her field work with Korean shamans every summer.