The Gospel of the Thirteenth Sunday presents Jesus among people. A man, a father, an official of the synagogue came. He went to Jesus to pledged to him: “My daughter is at the point of death. Please, come lay your hands on her that she may get well and live.”

“The daughters of my people are at the point of death. Jesus, please, come lay your hands on them, that they may get well and live.”

Two thousand years after this event, girl children and women continue to be the main group of people living in situation of social vulnerability. Women suffer any kind of discrimination.

The feminization process regards also exploitation and trafficking in persons. In fact, more than 70% of trafficked persons are women and girls, subjected to the most serious forms of coercion and are exploited to provide services and to produce many of the things, which we use and consume. Women and girls are trafficked mainly for sexual exploitation, domestic servitude, forced marriage and forced labour.

Trafficking in Persons (TIP) is a recent variation of the old practice of human exploitation, associated today with the process of globalization of the world economy. It is the process through which persons are deceived or coerced in moving from their place of residence to another place where they will be exploited in servile or slavery-like conditions.

Jane is 12 years old, like the daughter of Jairus.

When she was 10 a friend of her mother invited her to go the city, where she could go to school and help her family by working during the afternoon in a little shop, to earn some money. She dreamed a better life! She went!

When Jane arrived in the big city, she realized that there was no school opportunities for her, no job, nothing to sell in the shop, only her thin body -- for sex. Jane experienced for two years any kind of violence. When she was rescued she was at point of death.

Let us go back to the Gospel. The story of the Jairus daughter is interrupted by a woman, afflicted with haemorrhages for twelve years. She had heard about Jesus and came up behind him in the crowd and touched his cloak.

A powerful story of encounter between her and Jesus. Although she is remembered for her illness, I like to remember her for her courage and strong faith, which empower and enable her to overcome all the religious prescription to reach Jesus and to touch him. This is also my experience, when I started to get involved in anti-trafficking. I have heard about the presence of God among the poorest and marginalized people. The impure of my time! I had to change and to convert to touch Him (Jesus) through my sisters and brothers exploited and deeply wounded by trafficking. They cured me, deeply! Like the woman.

The encounters in everyday life are moments of shared hope and pain with systematically exploited people deprived of their dignity. They are moments to contemplate the presence of God. They teach me and us that dignity is a gift that we can give each other through sororal and fraternal relationships marked by the presence of the Holy Spirit. We dignify each other together through daily simple gestures, sharing the joys and the pain and going on to row upstream stubbornly and with confidence against the tide of the dominant message of a society increasingly led towards power, fear, indifference and individualism.

The scene of the Gospel changes again. Jesus is now close to the Jairus daughter, he took the child by the hand and said to her: “Talitha Kum” -- that means, “Little girl I say to you. Stand up, arise!”

“Talitha Kum” is a powerful word. It calls to mind the transformative power of proximity, compassion and mercy.

It awakens from the slumber of passivity, resignation and indifference. It awakens the deep desire for dignity, respect and life which may be asleep and injured by the many forms of discrimination, exploitation, violence, and social exclusion that women and girls suffer.

Since I was called to Rome, at the International Union of Superiors General, to coordinate Talitha Kum – the Worldwide Network of Religious Life against Human Trafficking -  every day I write, I listen and I read this word several times. This word is empowering and strengthening me.

Talitha Kum Network is present in 76 countries in the 5 continents and it was established officially in 2009.

Talitha Kum is call of hope, giving us the courage to carry on weaving together networks of freedom and dignity, witnessing to our commitment as consecrated women and men to announce the Kingdom, drawing spiritual sustenance from being with those who are set deep in darkness of social vulnerability and exploitation.

Talitha Kum is an invitation to all to stand up to counter with our voice, our actions, our daily choices and our lives everything that promotes and supports exploitation and trafficking in persons. It is an invitation to denounce the arrogance, violence and banality of economic and financial power, when it acts against the dignity of the person. 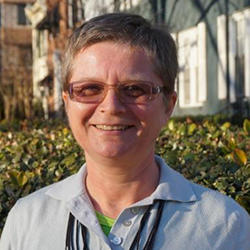 Sr. Gabriella has been the International Coordinator of Talitha Kum, the Worldwide Network of Religious Life against trafficking in persons, constituted by the UISG (International Union of General Superiors) since 2015.  Talitha Kum -- headquartered in Rome, Italy -- is a network of 22 local networks, based in 76 countries in 5 continents.

Sr. Gabriella first encountered victims of human trafficking in the 1990s while volunteer social work among homeless women and refugees. Deeply touched by their fear, distress and lack of freedom, she decided to commit her life to freedom and against every form of exploitation and human trafficking.

Sr. Gabriella is member of the Comboni Missionary Sisters, an international and multicultural congregation of religious women. She has been living in communities with women of several cultures, nationalities and social background, sharing God's passion for human dignity, justice, pace and freedom, in the slums of big cities.

She holds an A.D. [Academic Degree] in Social Pedagogy by the “Georg-Simon-Ohm Fachhochschule Nuremberg.”