Isn’t it interesting, even puzzling, that we who are baptized into Jesus Christ as Priest, Prophet and King never hear about prophets?    When Jesus asks the disciples:  “Who do people say that I am?”  they reply that he is thought to be one of the prophets.   Can  you remember a single time that you were in fact called to be a prophet?   Let’s reflect together on the Scriptures we are given to hear on this 14thSunday in Ordinary time, and seek to know the call of a prophet, and then why are we so slow to recognize prophets and to accept this important call of our very baptism?

The reading from Ezekiel recounts his own call to be prophet:  it is the work of the spirit of God, (thus, it is God’s intiative)  causing one to stand strong, and to speak to those who are hard of face and obstinate of heart.  Not a happy task. No wonder we don’t speak of it.

Furthermore, in Paul’s second letter to the Corinthians, he lists the responses that a prophet might face, as he did  himself:  weakness, insults, hardship, persecution, and constraint.  Recall the hesitancy of both Isaiah and Jeremiah when they heard the call to be Prophet.  Go ask someone else, God.  Jesus himself asked that the cup be removed, for some prophets even face death. Even in the harsh realities that face a prophet, Paul relies on the power of Christ, and continues his mission for the sake of Christ.  Oh my, this prophet business is hard.

Finally, in the Gospel, the people of Jesus’ home place hear his prophetic preaching and take offense.   And Jesus speaks the familiar text:  “A prophet is not without honor except in their native place and among their own kin and even in their own house.   It is one thing to be rejected by strangers, but even one’s own family and friends???   Almost nothing is worse.

Let’s be a little more clear about this call to be prophet.  You certainly know that it’s not about foretelling the future;  though it is about naming the consequences of one’s actions.

I borrow from Old Testament scholar, Walter Brueggemann who suggests that a prophet is one who nurtures, nourishes, and evokes a consciousness which is alternative to the dominant culture around us.   In first world North America, the dominant culture is one of power, prosperity, consumerism, and a growing public narssicism.

The prophet accomplishes their call and task by criticizing this culture, the government, institutions, acceptable practices of abuse and oppression.  This criticism lifts the veil on all that is not of God or the model of Jesus.  But importantly, the prophet also energizes for the reign of God, pointing the way that  might be different, and more in tune with the reign of God:  that is, of love and the preferential option for the poor.

Prophets are not primarily lone, independent voices but rather individuals that emerge from communities suffering under the oppression of the dominant consciousness, and those who have compassion for them.  One example I can give is the prophetic stance of the students at Parkland High School in Florida, who survived  terrible violence in a shooting at their school. Their experience spurred them to prophetic action:  to criticize gun violence and groups complicit in it, and to energize for better laws regarding guns. . .for the purpose of peace.  I would add, the peace of the reign of God.

My friend, Walter Brueggemann, writes:  “The contemporary American church is so largely enculturated to the American ethos of consumerism that it has little power to believe or to act.”     But, we: all of us,  you and I, are the Church! And, if we took up the call to be Prophet, we might together birth the life that God intends, restore the life that God intends, and indeed light the way to the Reign of God on earth.

So, please hear or read the Scriptures of today again. And, I challenge you to speak about our baptismal call to be prophet. . .in the manner of Ezekiel, Paul, and Jesus our Christ. 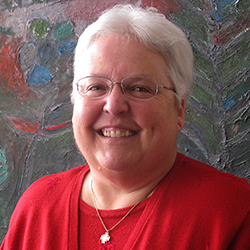 Sallie is a member of the Congregation of St. Joseph, and holds a Doctor of Ministry Degree from the Graduate Theological Foundation in Scripture and Spirituality.  Her experiences include high school teaching, parish pastoral associate, co-director of a House of Prayer, and teaching in graduate programs in ministry at the Edmund Rice School for Pastoral Ministry in the Diocese of Venice in Florida and at Catholic Theological Union in Chicago, where she has been Director of the Bible Study and Travel Program as well.  She holds a Religious Leaders’ Guide Card in Israel.  Sallie is a member of the Society of Biblical Literature and the Catholic Biblical Association, and a member of Spiritual Directors International;  is active in a number of Peace and Justice Organizations including NETWORK. Recently elected to the Leadership Team of her religious congregation, Sallie will leave her position at CTU in July, 2018.