I am Cecilia, and today I would like to reflect with you about my attempts to forgive and extend mercy given my experience in the mountains as a freedom fighter and as a political detainee during martial law in the Philippines.

I was born poor. At seven, I walked the streets selling fish every day. I also scavenged for food just to survive.

I started in the revolutionary movement as a teen-age catechist. I spent days among poor communities, telling of God’s mercy in the Exodus as He said to Moses: “I saw the affliction of my people and have heard their cries; set my people Free!”

And freedom has a price. The Marcos dictatorship soon turned its eyes to the Catholic Church because of its work for justice. Before I knew it, many were targets of the brutal military. Priests, nuns, and lay leaders were hunted down, including my young friends and me.

Many were killed and imprisoned. And so I was forced to hide in the mountains as a rebel leader and a young mother. The military ran an endless pursuit. To keep my first-born son safe, I was forced to give him up to my relatives and never saw him again until he was twelve.

After five years of fighting as a guerrilla, my husband and I were captured in a gun battle that lasted eight hours. I was then pregnant with my second child.  Soldiers killed my comrades in front of me. I pleaded with the captors to have pity and spare the life of two young boys I had just recruited into the revolutionary movement.

While they were kneeling, I begged for mercy, but their executioner said, “I regret to say, Madam, this is mercy killing and we are under Martial law.” I screamed at him that there is no mercy in killing – that it was “human slaughter.”

We were taken away by helicopter. I had a clear view of the fallen bodies of many comrades. I wanted to jump-- out of desperation and guilt. Why was I alive?!

Military officials took us to an interrogation room in their camp.  An army officer tried to rape me despite  my being eight months pregnant. I fought back. Surprised, he let me go. After two days in prison I gave birth to a son. I started my family while in prison, the last place I could have imagined. We rotted in jail for four years.

I can still remember days when I would climb a tree with my son on my back just to show him that there was something else out there, beyond the walls of the prison. I  promised him that one day he would live in it.

In this Gospel reading according to Matthew, Jesus tells us of the need to forgive our enemies. In my heart, mercy and forgiveness did not come easily. It took time to forgive the soldiers who shot in front of me the young comrades begging for their lives. I still feel anger against our captors and interrogators in prison, and in general the politicians who benefited during martial law at the expense of human rights violations.

Is swallowing what I endured and forgetting all the pain enough? I question myself. How does being merciful even to those who arrogantly provoked us lead to reconciliation? Why is it that forgiving is so difficult? For many years, I have demanded that our tormentors, “Pay back what you owe to us!” After being freed by the peaceful People’s Power revolution, I still felt as if I were in prison. I was never truly free, until one day I decided to let be and let God, and break away from the anger and pain that shackled my heart.

Dearly beloved and friends, we all have sinned and have fallen short in acknowledging the glory of God. The debt that we owe to God is like a mountain compared to the grains of sand that represent the debts of our fellow people against us. Yet, God forgives us for our sins. Why can we not forgive too?

I have decided to forgive from my heart my brother who hurt me. And it felt like genuine freedom. Mercy is the seed of courage to forgive my perpetrators and captors. I cannot just judge them by their wrongdoing – in the same way, I must not define my life in terms of suffering.

One can never have courage to forgive without mercy. Maybe mercy is about the courage to overcome the pain and suffering for a purpose bigger than us to which God calls us. Looking back to my days in prison, it was only in Christ where I found the strength to live. When I remember my days as a rebel leader, it was still Christ and his promise of deliverance that gave me the courage to fight. Throughout my life, as I fought for one form of freedom to another, Christ was at the center.

Brothers and sisters of different faiths and races, today I have committed myself to freeing children who are exploited in brothels, cybersex dens, and forced labor situations. For 25 years, I have focused on a mission to help victims of today and restore their hope for tomorrow.

In their journeys, I have witnessed the transformational power of forgiveness.  Again, I faced the  same dilemma of forgiving the heartless predators who made girls’ lives hell on earth. In Matthew 18: 21, Peter approached Jesus and asked him, "Lord, if my brother sins against me, how often must I forgive? As many as seven times?" Jesus answered, "I say to you, not seven times but seventy-seven times.”

Seven is a number indicating perfection and, in the case of Peter’s proposal, seven is synonymous with “always.” In the same spirit, I have seen victims forgive many times over, as many as they were sold and resold in prostitution.

Finally, as leaders in our organizations, communities and countries, what can we learn from these experiences? It is only when we are moved by kindness and compassion that we let go of others who abused our trust and expectations. As leaders we can teach every generation how to pardon inequities, heal social ills and redeem lives from destruction through grace and mercy – not revenge, not selfishness, and not fear.

May God who has the power and sovereignty over our lives, continue to bless us. Indeed, the Lord is kind and merciful, slow to anger, and rich in compassion. Amen! 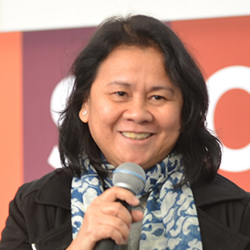 Cecilia Oebanda is the founder and president of the Visayan Forum Foundation, a leading anti-trafficking NGO based in the Philippines. For her innovative work in rescuing and healing girls and young women, she has been recognized by many prestigious institutions including the Anti-Slavery International, Skoll Foundation on Social Entrepreneurship, the US Department of Labor, the US State Department, the World’s Children’s Prize, among others. She continues to support shelters, sustain prevention campaigns and lobby for policy implementation of laws on child labor, human trafficking, domestic work and online sexual exploitation. She is a mother of four successful children. She enjoys nurturing her grandchildren in Manila and California.