Today’s readings are about leprosy—and gratitude. These aren’t two things we’d normally associate with each other, and yet both the Hebrew and Christian scriptures ask us to do that today. In 2nd Kings, Naaman seeks to be healed, but at first doesn’t believe that the guidance he’s been given will do the trick. When he was told last Sunday to immerse himself in the Jordan River, he argues with the prophet Elisha, insisting that the local waters of Damascus should be just as good. Eventually he relents, goes to the Jordan, dunks himself seven times, and is healed. In gratitude, he wants not only to thank Elisha, but to pay him—a payment that the prophet rejects. Finally, Naaman seems to understand, and realizes that what is being asked of him is acknowledgement of the power of the one true God, who really deserves all gratitude and praise. This is the message affirmed in today’s Psalm, in which we are told, repeatedly, that God has revealed saving power, for which all should sing with joy.

Leprosy comes back in today’s reading from chapter 17 of Luke, when we are told that Jesus heals ten sufferers. Yet only one of them returns to thank Jesus—only one. We are told that this person was healed through their faith, and their gratitude to God. The lesson I take from this is that God’s healing is unconditional—the other nine are not any less “cleansed” than the grateful one—but that it still matters how we accept God’s gift: with humility, thanksgiving, and recognition of God’s power to save even the ungrateful.

Leprosy is not the threat it once was: fewer than 100 people a year are diagnosed with it in the US, and effective treatments for it now exist. But we still tend to treat some folks as the outcasts (the “social lepers”) that those so afflicted once were: persons with AIDS, the poor, those who don’t look like or act like ourselves, and others too numerous to count. So how are we to understand the message of today’s readings in 2022?

Well, they resonate for me in two ways. First, I’m privileged to come from the diocese where St. Marianne Cope, otherwise known as Mother Marianne of Molokai, initially lived and served before she and a small band of her Franciscan sisters went to Hawai’i to help take care of those afflicted with leprosy, now known as Hansen’s Disease. Marianne was living a life of some privilege, managing a big hospital in Syracuse, New York (the still-active St. Joseph’s). But she chose to go to live and love and work among people who were the rejects of respectable society, promising those who went with her that no member of the community would ever contract the disease if they devoted themselves to this ministry. [And none ever did.] In the years since St. Marianne’s death, her daughters have continued their ministries not only in Hawai’i but throughout the US. They understand her legacy as one of service, of gratitude, and of love, and one that has led them since to minister to street people, to persons with AIDS, and to refugees and others cast aside by those more fastidious than the sisters—and than Jesus. As her sisters today put it, they seek to live and serve with compassionate empathy, embracing her legacy with gratitude and joy.

But I can’t just think of today’s message impersonally—or as something that only others are expected to respond to. And so I look back to my own most serious crisis of health and faith: when I found out I had lung cancer 22 years ago. Yes, I was a smoker (and, yes, I knew better, but I was unquestionably addicted). Even after I was diagnosed, I found it impossible to completely stop smoking on my own.

Now, I had a dear friend, Sister Ritamary Bradley, who died only two weeks before my disease was detected. And she hated smoking—really hated it. On the Month’s Mind of her death, I found myself reaching for a cigarette as I tried to do some work. I stopped. And said out loud: “this is ridiculous—you have cancer!” And I prayed to Ritamary, for her intercession and help.

Truly, as today’s Psalm proclaims, Yahweh is faithful and has done wondrous deeds. What has God done for you? There are miracles all around us. Have you said “thank you” today? 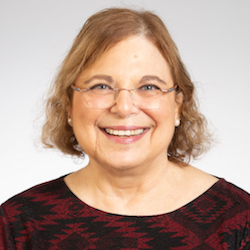 Margaret Susan (Peggy) Thompson is a professor of History and Political Science at Syracuse University’s Maxwell School of Citizenship and Public Affairs.  She is also a Senior Research Associate at the Campbell Public Affairs Institute, and holds courtesy appointments in the Departments of Religion and Women & Gender Studies.

Prof. Thompson was trained as a political historian, with a focus on the  nineteenth-century United States and, particularly, the Congress. Her first book, The “Spider Web”: Congress and Lobbying in the Age of Grant (Cornell University Press), reflects both her scholarly and hands-on experience, the latter as American Political Science Association Congressional Fellow. Recently, Professor Thompson’s work has focused on the history of American Catholic nuns. She has written and lectured extensively on the subject, and has an 18-lecture audio series available through Learn25.com. Her research is from an explicitly feminist perspective, emphasizing the agency and social significance of sisters to American religious and secular history. As a result of this research, she has had the privilege of speaking internationally as well as across the U.S., and has served as a consultant to numerous documentarians and religious communities. Her most recent publication is “Sacraments as Weapons: Patriarchal Coercion and Engendered Power in the 19th-Century Convent” (Journal of Feminist Studies in Religion, Fall 2022), and she has presented in the FutureChurch Women Erased series.  Her forthcoming book, The Yoke of Grace: American Nuns and Social Change, 1809-1917, is under contract with Oxford University Press.

Prof. Thompson is also grateful to be part of the preaching rotation in her parish: St. Lucy’s in Syracuse, New York.