Just a while ago, one of our Sisters put a message into the group chat, an image of all of the nails that she had meticulously pulled out of old pieces of wood, one by one, so that the wood could be used again for the construction of a shed in our backyard. It was an image of patience, an image of persistence. It speaks to us of how we understand persistence: the plodding along, the understanding that there is something greater that we are working for, and that we have to do the hard and consistent work…continuously…in order to get there.

Any form of hope must include a communal dimension. It is a hope not just for myself and for what I can do, a hope that comes from my own strength; it is a hope that necessarily includes the community. This is present as Moses hold us his hands for the good of the Israelite army who are encountering the forces of evil in Amalek’s forces. The Israelites had just complained about not having food, and they were given manna from heaven. Then they complained that there was no water to drink, and so God poured forth water from a rock. And here they are, fighting against a communal hopelessness, and Moses keeps his arms outstretched to sustain them, with his own arms being supported by Aaron and Hur. The communal presence is necessary to continue a communal hope, and there is resistance against any kind of hopelessness.

It is interesting, then, in our Gospel reading, that when Jesus speaks about the need to be persistent in prayer, he does not pull out the example of Moses, but rather, he turns to the widow: a poor widow who has not actually seen manna falling from heaven, a poor widow who has not witnessed water being poured forth from a rock, and a poor widow who is not watching the Israelite forces defeat the great forces of Amalek’s army. She is a poor widow, rather, who desires that justice be done for her…in her daily life, in the smallness of the life. This is the example that Jesus pulls out. Here too we experience - in the daily, in something that relates much more to us and to the people that we know and love – Jesus speaking of this need of continued persistence and resistant hope. For this poor widow must resist three things:

She has to resist the self-doubt that must be a tempting presence, the sense that “I am nobody,” that “no one will ever listen to me,” that “I should just make do with what I have,” that “justice could never be done for me.” She has to resist that self-doubt, that sense of worthlessness, to be able to continue in that persistent hope that there is justice to be done.

She must also resist the tempting thoughts that “nothing can change,” that the heart of the judge could never be changed, that the poor will never be listened to, that justice will never actually be done. This is indeed a very tempting thought that must be resisted, because there must be a sense of hope that something can change, that the heart of this judge could somehow be touched, that things can look different. She had to be persistent in this.

The poor widow also speaks to us, I think, of the need to hold out that resistant hope against placing God in any form of a box that would be far too small for our God, any form of that box that sees God as the “fixer of problems,” the one to simply fix things. We would have to resist that, because that indeed would be a small God. Resisting that looks like holding out hope in the One who first breathed out resistant hope, the One who knows our struggles and has shared in them, the One who sees the small, the One who sees the broken and is there, holding out a resistant hope, entering into those spaces. For hope indeed is a great thing. Hope indeed is something to live into, sometimes requiring persistence and that resistant hope. For as Scripture promises us: hope does not disappoint (Rom 5:5). 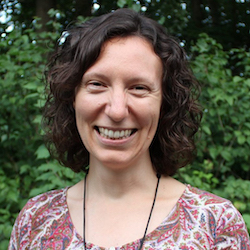 Sister Jessica Kerber is a Handmaid of the Sacred Heart of Jesus, an international congregation of Women Religious with Ignatian Spirituality and a charism of Eucharistic Reparation.  This charism and spirituality, experienced and reflected upon personally, give rise to the desire to allow God to be known well (and therefore loved) as One who does not run from the wounds or from that which is incomplete, but rather enters into these sacred places, giving way to the truth of an expansive love and possibility.

Sister Jessica studied elementary education as an undergrad at Valparaiso University and then served with the Jesuit Volunteer Corps on a reservation in Montana. As a sister, she completed her philosophy and theology studies at the Jesuit Pontifical University in Madrid, where she also studied about the Spiritual Exercises of St. Ignatius and spiritual direction.  Over the past 8 years she has taught from kindergarten religion to university theology, and has been accompanying university students and young adults on their faith journey. She has had the privilege of living and serving with her sisters in Latin America, Europe, and Asia.

Sr. Jessica currently coordinates the Ignatian Service Minor at St. Louis University and teaches a course within this program. Her primary role, however, is as formator for her sisters, offering opportunities and accompaniment for the sisters of temporary vows to continue to explore, deepen, and discern their vocation as Handmaids.