Today we celebrate the Solemnity of All Saints, which is a celebration of all the saints of the church, whether they are known or unknown.

Usually, when we talk about the saints we focus on those we know, today I would like the theme of our reflection to be “the unknown”.

In today’s first reading, the reading of the book of Revelations, one question is brought up: Who are the servants of God?

It also says, the servants of God are the ones who have survived a “time of great distress,” of persecution, and who despite such persecution or distress, have managed to “wash their robes and make them white”. The book of Psalms describes the servants as those of “clean heart and pure hands”; that is, those with clean intentions, intentions that reflect in their actions. Not only those who say that they “love” the other, but those whose actions reflect that love.

The best answer to the question of “who are the servants of God?” comes from Jesus. Speaking from the mountainside, among the crowds, Jesus announces the “kingdom of heaven” with a set of sayings attributed to him, that show what lifestyles lead to happiness. Not a temporary happiness, but the deep happiness that comes from building the Kingdom of God on earth, in the here and now.

In English these beatitudes start with the words “Blessed are”. In Spanish we say “Dichosos son.” Dichoso means “happy, a very deep happiness.”

Through the beatitudes, Jesus, doesn’t uplift the powerful, the political or religious leaders of his time; he uplifts qualities of people who are usually considered “less than.” A paradigm shift compared to what was believed to bring happiness and holiness at the time.

The kingdom of heaven belongs to those with humility because they understand there is so much to yet discover about God’s creation, and they are humbled by that realization. They don’t fear what they don’t know.

*Jesus also says, “Blessed are they who mourn,” the afflicted, those who have suffered. But how can suffering be a blessing or a way of building the kingdom of God? Jesus was not uplifting the suffering itself; he doesn’t want us to purposely put ourselves in harm’s way and suffer in his name. Rather, he uplifts those who have gone through difficult times and who are able to connect with their own suffering, with their wound, and who are able, as a result, of touching and understanding other’s wounds. If I have suffered and have taken the time to process that suffering, I will be better able to connect with others who are vulnerable and build a kingdom of God that includes them. But if I cannot bear to even become vulnerable with myself and reach into my own wound, or if I believe I don’t have any wounds to address, then I will not be able to be kind to the wound of another.

*Jesus says “Blessed are the Meek?,” those who know they depend utterly on God. Yes, maybe I am great, and smart, and hard-working but whatever great things I do, have only been accomplished by the grace of God. Perhaps I was born with some privilege that others didn’t have, perhaps I had a very supporting network, perhaps I was born on a side of the globe where there was less conflict.

*Jesus says, “Blessed are those who hunger and thirst for righteousness,” for justice. Blessed are those who work tirelessly to create structures on earth that mirror that which is in God's heart.  Those who understand that inequality and a world were some as seen as "less" than others, is not reflective of the kingdom of God. Blessed are those who listen to and uplift the voices of the poor, of women, of migrants, of LGBT persons, of the differently abled, of the young and the elderly, of those who experience racism and prejudice, of those who have borne more suffering than most of us could ever bear.

Today's gospel is a call for all of us to ask ourselves: when have I thought that I know everything? when have I tried to put God in a Box? when have I not been able to connect with other people’s suffering? when have I failed to listen to the lived experience of those I consider “less than”?

I will leave you with this. I have been a lay minister in Young adult ministry for most of my life, and a minister in LGBT Ministry, ministry with and for Lesbian, Gay, Bisexual, and Transgender persons for the past 7 years or so.

I myself am an LGBT Catholic. For a long time I questioned God and I’ve had to live with the unknown: “Why did you make me this way, God?” I’m still discerning the answer to that question, but all I know for now is the answer that I’ve received in my heart: “because I love you, and because I want to reveal a part of myself through your lived experience.”

In LGBT ministry I often get a lot of pushback and fear and judgement of myself and of ministry to LGBT Persons.

How can we know the Saints fully, if we don’t recognize those saints who are unknown, who come from sections of the population we consider “less than.”

We are called to be a Church of encounter, a Church of accompaniment, and listening Church. As we begin our journey in the Synod on Synodality I encourage you to ask yourself, what are the walls that I have built around my version of God? What are the limitations I have given to sainthood? I guarantee you, next time you hear someone say an LGBT person is holy or a saint, you won’t ask “how can this be”, rather you will ask “how did I not see this before?”

Start listening to the stories of people who are different than you and ask God to guide you on a journey of discernment about the unknown. 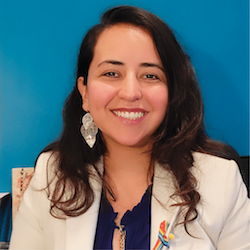 Yunuen Trujillo is a Catholic lay minister, a faith-based Community Organizer, and an Immigration Attorney. As a lay minister, she has served in Young Adult Ministry for more than 15 years and she is one of the leading figures for inclusive Catholic LGBT Ministry in the United States. Yunuen is a regular speaker at the yearly Los Angeles Religious Education Congress, a Congress that draws about 30,000+ attendants from all over the world, where she teaches about inclusive LGBT Ministry. As a community organizer, she has worked with L.A. Voice PICO, a faith-based, multi-faith, multi-racial organization that works to create a society that reflects the Dignity of all persons; working on issues such as immigrant rights, education, and criminal justice reform. Yunuen is also the founder of the Instagram @lgbtcatholics, an online platform of resources for Catholic LGBT Ministry, and she is the Religious Formation Coordinator (Sp) for the Catholic Ministry with Lesbian and Gay Persons of the Archdiocese of Los Angeles. She is the author of the upcoming book LGBT Catholics: A Guide for Inclusive Ministry, which is being published in Spring 2022 by Paulist Press.