As a mother of four beloved and beautiful children, I generally consider it my top priority – bullet point number one in my job description – to keep them alive. To keep them safe, well-fed, sheltered, and protected from harm. When they were babies, I cradled and nursed them and stayed up many nights to comfort them when their tummies were troubled or they were cold, hungry, wet, or soiled – but even if they weren’t awake and demanding attention and care, I would often wake up multiple times throughout the night to simply check and make sure they were still breathing. As they have gotten bigger, I have given them more and more space to grow, try things on their own, learn to walk even if it means falling down, and make mistakes that are theirs to make. I don’t hover over them anymore to make sure they are breathing. But through it all, my number one goal has been to keep them as physically safe as possible from dangers to life or limb. I’m making lots of mistakes as a parent, but if I can just keep them alive until they are 18 – or maybe 25, or whenever their own brains are mature enough to recognize and avoid mortal dangers – then I’ll have done the bare minimum that my job – no, actually the minimum that my heart requires.

Not only do I have a primal, deeply rooted urge to keep my children safe, a wave of horror washes over me when a fear or image of their demise comes to mind. And so, I must confess and I hope you will understand that when I read this story in Second Maccabees of the martyrdom of the Jewish mother and her seven sons, my first instinct is to enter the drama and shake this woman who seems to silently accept the torture and murder of her sons. I want to say to her – “Please, just eat the pork!! And tell your poor boys to eat it too!! . . . Then run away!!! Far, far away!” From my 21stcentury white, Western, Christian perspective, it’s just pork, after all. And running away is always an option. Right? Every fiber of my being cries out to this woman: “Just do what you have to do to keep them alive, mama. Do whatever you have to do to keep those poor babies alive.” And this mother of seven sons is not the only mother who is caught up in the horrific drama of sacrificing her children when faced with the demands of the Seleucid Empire. The Maccabean narratives tells of two other women who defied the imperial ban on various aspects of Jewish identity by having their sons circumcised. They, with their infant sons, were thrown from the city walls. At least according to the text, these mothers did not protest their fate and the fate of their children either.

Now mothering is a task that takes on cultural specificities in every time and place and it is shaped and molded according to the social constructions and inequities of gender, race, and class. A mother’s desire to protect her children from harm contends with many different threats and responds in many different ways depending on her social location. But it is not an uncommon thing for mothers (and parents in general) to want to keep their kids alive. This is why black parents give their children ‘the talk’ about strategies to stay as safe as possible in a racist world and it’s why black mothers have come together to form a movement that protests the destruction of their children’s black bodies by the state. It’s why the Mothers of the Plaza de Mayo in Argentina marched and marched for years and years holding photos of their disappeared children to protest their incarceration, torture, and execution by the state. It’s why Liberian women peacemakers used their cultural status as mothers strategically and symbolically to demand peace in their country after 13 years of brutal civil war.

The list of these examples could go on and on, but what is so remarkable here is that the mother of the seven sons in Maccabees does the opposite of protesting violence and protecting her sons from the murderous workings of Empire. What is going on here? Unfortunately, the lectionary text for today doesn’t give us a clue. In fact, the lectionary text doesn’t give us ANY insight into the mother’s actions, words, character, motivations, or rationale in this narrative of martyrdom. But the rest of the text of Second Maccabees does! Reading further on in chapter seven reveals that she actually urges her children on to accept gruesome and painful tortures and violent death rather than acting on her deeper desire to see them alive and unharmed. The author of Maccabees therefore praises her courage in verse 20, calling her “most admirable and worthy of everlasting remembrance” (2 Macc 7:20) – an accolade so great that one would think that it should have made it into the communal memory of the Catholic lectionary. But I digress. In verse 21, the author continues to marvel at the woman’s courage and relates her own words to the reader, “she exhorted each of them in the language of their ancestors with these words: ‘I do not know how you came to be in my womb; it was not I who gave you breath and life, nor was it I who arranged the elements you are made of. Therefore, since it is the Creator of the universe who shaped the beginning of humankind and brought about the origin of everything, he, in his mercy, will give you back both breath and life, because you now disregard yourselves for the sake of his law’” (2 Macc 7:21-23). And, in verses 27 – 29, the author relates the mothers’ words once again: “she leaned over close to him [the youngest son] and, in derision of the cruel tyrant, said in their native language: ‘Son, have pity on me, who carried you in my womb for nine months, nursed you for three years, brought you up, educated and supported you to your present age. I beg you, child, to look at the heavens and the earth and see all that is in them; then you will know that God did not make them out of existing things. In the same way humankind came into existence. Do not be afraid of this executioner, but be worthy of your brothers and accept death, so that in the time of mercy I may receive you again with your brothers” (2 Macc 7:27-29).

If we are allowed to witness the actions and hear these words of the mother herself here, we can glean a sense of why she would not only stand by as her sons were tortured and murdered, but would encourage them to flaunt the demands of the King and accept their fate as martyrs. The theological depth and wisdom of the mother’s words points to something far more important and enduring than keeping her kids alive. In fact, it appears that her exhortations to martyrdom are themselves an everlasting means of protesting and resisting the cruel tyranny of the King and the larger Empire that held the Jewish people under its rule. Her words indicate that what is at stake here is not “just pork.” It is the faithfulness of her people – her sons – to their identity as creatures of Yahweh, who called them into being, chose them for dignity and righteousness, and established the law as a sign of their covenant with their divine origin and destiny.  The law – which in this case forbids the consumption of pork – is not a list of petty rules and regulations to be followed with blind obedience. Nor is it simply a sign of the distinctiveness of the Jewish people as the chosen ones of God. The law here is also a divinely empowered mode of everlasting resistance to Empire, an eternal mode of affirming Jewish dignity and pride in identity, despite the experience of oppression and humiliation under the King.

You see, under the Seleucid Empire, the imperial, colonizing forces attempted to do what imperial, colonizing forces always do. They attempted to wipe out the culture, worldview, and mode of being of the colonized. According to the author of Maccabees, the Jewish priestly class and their powerful associates went along with this evil operation in order to grasp at whatever power and privilege that they could under this foreign rule. It was the pious and more vulnerable Jewish persons on the margins of society – women, children, an elderly sage named Eleazar – who resisted, who kept the faith, honored the covenant with Yahweh, and thus maintained the identity of their ancestors. Note that the mother speaks to her youngest son and urges him on towards martyrdom not in Greek, but in their native language, the language of their ancestors, for this is the language of the law and thus of the covenant.

And it is the covenant that is everlasting. The mother of the narrative professes faith in the faithful, creator God of her ancestors, a God whose creative power would surely endure and overcome the destructive forces of Empire. This text is therefore prevailed upon as one of the earliest sources of Jewish belief in the Resurrection. And yet the lesson that I take from the text for today is far more illuminating for life in this world than in the next. Keeping our kids, and by extension ourselves, our loved ones, and our communities safe from harm is not the only thing that matters in this life. When all that matters is staying alive, we end up going down the path of the Hellenizers, and selling out to the evil, unjust, and violent demands of Empire – the demands of whiteness, of nationalism, wealth, power, prosperity, security, and competition. These nefarious forms of pork are a direct violation of our covenant with the God of our ancestors, the God of Jesus and of the Maccabean mother who resisted by affirming the dignity of her people in her own language to the very end. We debase our God-given dignity by giving in to the demands of Empire. And we are therefore faced with the task of ejecting and rejecting that pork, of undoing all that which binds us to the ways and means of Empire and severs us from covenant with the divine, with creation, and with our fellow human beings.

By way of conclusion, I’d like to invite you to consider how you and your own people have refused and/or eaten the pork, have resisted and/or given into the demands of Empire in your own stories? What would it mean to reject the pork and accept the consequences in your own time and place – in our time and place? 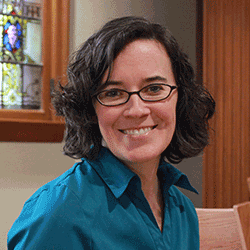 Elizabeth O’Donnell Gandolfo is Edith B. and Arthur E. Earley Assistant Professor of Catholic and Latin American Studies at Wake Forest University School of Divinity in Winston-Salem, North Carolina. She holds a B.A. in Theology from St. Joseph’s University, a Masters of Theological Studies from the University of Notre Dame, and a Ph.D. in Theological Studies from Emory University. Gandolfo is a constructive theologian whose teaching and research interests include the following themes in feminist and Latin American liberation theologies: the place of motherhood in theology and spirituality; the theological and political significance of remembering suffering; and the ecclesiology of Christian base communities in Latin America. Her first book, The Power and Vulnerability of Love: A Theological Anthropology (Fortress, 2015), draws on women’s experiences of maternity and natality to construct a theology of suffering and redemption that is anchored in the reality of human vulnerability. She is also co-editor of a book of essays on mothering entitled Parenting as Spiritual Practice and Source for Theology: Mothering Matters (Palgrave MacMillan, 2017). Her theological work is informed, and often interrupted, by the daily work of caring for four young children.