Thirty years ago this weekend, in the early morning hours in the city of San Salvador, six Jesuits, their cook, and her 15-year-old daughter were murdered at the University of Central America by Salvadoran government forces.

The Jesuits were professors, academics, intellectuals at the top of their game. And they were killed because they were outspoken advocates for those who were poor and suffering in a country that had already been wracked by a decade of a violent civil war. Their intellect was coupled with the wisdom that they needed to use their power and privilege to work for a more just society. They lived out Pope Francis’ vision of the Church as a field hospital for the wounded, a poor church for the poor. For doing this – for the Gospel work of bringing good news to the poor – they were deliberately killed. They are martyrs, witnesses to the faith.

In today’s Gospel, Jesus warns us about what it means to be a martyr. He tells us what will happen to those who follow his name, and it can feel contradictory: They will be persecuted, even killed, but not a hair on their head will be harmed. It seems like both can’t be true. But we live in the tension of God’s kin-dom here but not yet. What seems like utter loss and destruction here may, in the kin-dom view, be redeemed through the love of Christ that overcomes death.

In today’s second reading, the group receiving the second letter to the Thessalonians was living in this already/not-yet tension. The first letter to the Thessalonians held the expectation that Jesus’s second coming was any day now, so be ready. But this second letter – tempered with the passage of time and the persecution of the community – reminds Jesus’ followers that the apocalypse hasn’t happened yet, so the way they, and we, behave still matters here on earth. Our actions will reveal our commitment to the Gospel.

Jesus says in today’s Gospel, “I myself shall give you a wisdom in speaking that all your adversaries will be powerless to resist or refute.” That wisdom – in Greek, sophian -- comes from the Holy Spirit – the same Sophia-Spirit that in the fourth chapter of Luke Jesus proclaims is upon him, in the words of the prophet Isaiah, to preach good news to the poor, proclaim release to captives, give sight to the blind and let the oppressed go free. It is the Sophia-Spirit given to Stephen, the first recorded martyr in the Acts of the Apostles. It is the same Sophia-Spirit that has animated martyrs from Felicity and Perpetua in the early Church to modern prophetic martyrs like Sr. Dorothy Stang, who stood in solidarity with the people of the Amazon. It is a Sophia-Spirit that converts us. One of the Jesuit martyrs, Ignacio Ellacuria, said that conversion to God must be conversion to the poor. THAT conversion, revealed in our commitment to loving those who are most on the margins, is the wisdom, the Sophia-Spirit, that Jesus promises us our adversaries are powerless to resist or refute. Living out a conversion to Christ in the face of those who are poor can have profound consequences, as the martyrs show us. But Jesus promises us that he will meet our courageous conversion with his unfailing Wisdom, Sophia.

The deaths of martyrs can feel like total loss. Like victories for the powers that be. A reminder of our insignificance in the face of the wars, insurrection, earthquakes, famine, and plagues that Jesus names in the Gospel today. But we are a people of unreasonable hope. Hope that in the final say, the evildoers will be stubble and God’s love will heal like the rays of the sun, as the prophet Malachi writes. Hope that, as the second reading reminds us, how we are in community matters and reflects who we are as Christians. Hope that beyond the violence and chaos in this world – even peeking through it, if you look hard enough – is the reign of God, the upside-down reign where the last are first, the lowly are lifted up, the hungry are fed, and all people are revealed in their fullness as beloved children of God. The martyrs lift the veil and show us this: Are we willing to look? They offer us a path: Are we willing to follow? And they co-create the reign of God here on earth: Are we willing to continue the work? 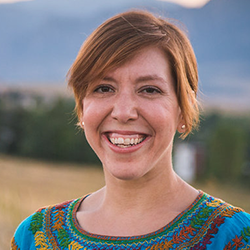 Katie Lacz, M.Div., works as Program Associate for the Women’s Ordination Conference, the oldest and largest organization advocating for the ordination of women as deacons, priests, and bishops into an inclusive and accountable Roman Catholic Church.

Katie has ministered to young people exploring the intersection of faith and social justice through Regis University’s Catholic Campus Ministry Association award-winning Romero House program, and as part of the staff of the Colorado Vincentian Volunteers, a post-graduate volunteer program in Denver animated by the charism of St. Vincent de Paul. As a Jesuit Volunteer, she worked as a community organizer against the death penalty in North Carolina as part of People of Faith Against the Death Penalty.

Katie earned her Master of Divinity from the Jesuit School of Theology of Santa Clara University in Berkeley, and her B.A. in journalism from Ithaca College. She is a spiritual director, a writer, and a contributor to the Ignatian Solidarity Network’s Rise Up series. Born and raised in Schenectady, NY, she now lives outside Boulder, CO, with her husband, two children, and greyhound.