Two lowly women of Judea, living under the subjugation of the Roman Empire, meet under the most extraordinary circumstances to share the great things God has done for them. The elderly, childless Elizabeth has now conceived a son. The teenage Mary has been visited by an Angel and through the power of the Holy Spirit will bear the Messiah, God’s Son, whose reign will have no end. Sharing their stories of faith, they are lifted up in God’s grace. They know in a new way their value and dignity in the eyes of God. Elizabeth, filled with the Holy Spirit, says to Mary, “Blest are you among women, and Blest is the fruit of your womb” (Lk 1, 42,).

And Mary says, “My soul magnifies my God, and my spirit rejoices in God my Savior, for the Holy One has looked with favor on me a lowly servant” (Lk 1, 46-48).

On these mystical heights, Mary prophecies about God’s coming reign of justice and peace: “The powerful will be brought down from their thrones, and the lowly lifted up! The hungry will be filled with good things, and the rich sent away empty” (Lk 1, 46-53).This visitation of Mary and Elizabeth strengthens the bonds of sisterhood for the challenges ahead. And both will suffer.

Like Elizabeth and Mary, Christians through the ages have known that God’s grace is both gift and responsibility. Dominican mystic, Meister Eckhart, once remarked, “What is the good to me of Mary’s being full of grace if I am not full also?

What does it profit me the Father’s giving his Son birth unless I bear him too?”

The season of Advent reminds us that this ancient biblical story must become our story, with its abundant grace and its costly responsibility.

This story of Elizabeth and Mary birthing God’s Word and laboring for God’s reign on earth was enfleshed in a new way by the African men and women enslaved in Colonial America. In the first hundred years of slavery in the United States, some Catholics and a few Protestant denominations began slowly and sparingly to teach their African slaves the Christian faith, highlighting, of course, that they should serve their slave masters as they would serve Christ. Most slave owners at this time, however, prohibited their slaves from Christian worship or instruction because they “were not willing to raise slaves above the level of animal property and thus concede that they were buying and selling souls worthyof saving.”[1]

Nevertheless, as slave narratives tell us, black preachers began to emerge, and small groups of slaves would sneak into the woods to pray and sing together. In their lowliness, God visited them. They, too, were filled with grace and experienced a freeing of their Spirits. Lifted high in God’s love, they felt their value and dignity as human beings made in God’s image. Like Elizabeth and Mary, they trusted that nothing was impossible for God, whom they believed would deliver their descendants from slavery.

One black preacher in North Carolina, named Isaac, freely embraced the costly discipleship needed to bring God’s reign on earth. One night he held a secret prayer meeting in the woods and was caught by the slavemaster. Isaac was flogged for preaching the gospel. His master then poured salty brine on his back. When he was nearly well, he was flogged again, and this went on and on, until he died.[2]

When I first heard this story, I felt pride and admiration for our African brothers and sisters who resisted the cruel oppression and religious persecution perpetrated by our nation. I also felt shame and guilt to see the hateful bigotry and selfish inhumanity of our country. Like the Roman Empire, our country has subjugated other peoples for its own profit and prosperity. Pax Romana looks a lot like Pax Americana. A culture of racism continues in our own day. White privilege continues to promote unfair social and economic benefits for white citizens, while bringing cruel discrimination and costly disadvantages to people of color.

As we celebrate the birth of Christ this Christmas, how can we birth Christ in our time and culture? What steps can we take to overcome racial injustices in our country? Like Elisabeth and Mary, will we, too, be full of grace? How will we labor with God, who brings down the powerful and lifts up the lowly so that as sisters and brothers we may live in dignity and equality as the one family of God? 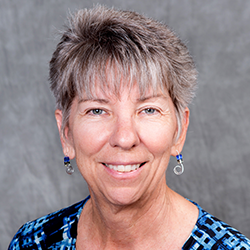 Dr. Sara Fairbanks, OP, is an Adrian Dominican Sister. She is currently a professor of homiletics at Aquinas Institute in Saint Louis, Missouri. Before going to Aquinas, she taught systematic theology for twenty years at Barry University in Miami, Florida. Sara holds a Master of Theology from Aquinas Institute of Theology in St. Louis and a Doctorate in Theology at the University of St. Michael’s College, the Toronto School of Theology in Toronto, Canada.  Her areas of expertise are homiletics, theology of lay ecclesial ministry, theology of preaching, practical theology and Christian anthropology.

Sara published Fully Human: Understanding Christian Anthropology:12 Lectures on DVD and CD.Bethesda, MD: Now You Know Media, 2017.She has published extensively on lay ecclesial ministry and lay preaching in numerous scholarly journals, such as, Worship, The Way, Liturgical Ministry, and Listening: Journal of Religion and Culture. She is a contributing author to the series Feasting on the Gospels—Luke Volume 1: A Feasting on the Word Commentary(Westminster John Knox Press, 2014). She also contributed two chapters to Theology: Faith, Beliefs, Traditions(Kendall Hunt, 2010).

Sara has given numerous lectures to different organizations, such as, the Catholic Theological Society of America, the National Organization of Continuing Education for Roman Catholic Clergy, the Giving Voice Conference and the Pollok Lectures at the Atlantic School of Theology in Halifax, Nova Scotia. Sara also works every summer at the Dominican College Preaching in Action Conference as well as the Dominican High School Preaching in Action Conference offering students workshops on the art of liturgical preaching.

Sara has also served as the Director of Vocations for the Adrian Dominican Sisters and publishes“Disco: Discernment Conversations,” a bi-monthly video blog on vocational discernment.