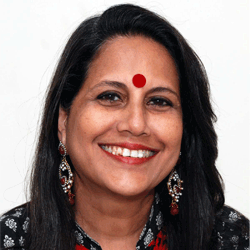 Astrid  Lobo Gajiwala has a PhD in Medicine, and Post Graduate Diplomas in Tissue  Banking, Bioethics, and Theology. She heads India’s first Tissue Bank which  she established in 1988, and served as India’s Project Co-ordinator for Tissue  Banking for the IAEA. She was the first woman President of the Asia Pacific Association of Tissue Banking.

She is  a founding member of Satyashodhak a Mumbai based feminist collective that, since its inception in 1984, has contributed significantly to the empowerment of women in the Indian Church: member of the Indian Theological Association (ITA) at a time when the majority of theologians were men, and currently serves on their Executive Committee; founding member of the Indian Women’s Theological Forum (IWTF) and former Assistant Co-ordinator for Ecclesia of Women in Asia (EWA), which bring together women theologians from academia and the grass roots; member of the ecumenical Indian Christian Women’s Movement (ICWM); and former Secretary of the Archdiocesan Pastoral Council and Vice President of the Parish Pastoral Council.

Recipient of two awards for journalism, she contributed to the anthology: Catholic  Women Speak: Bringing Our Gifts to the Table that was distributed to the  bishops at the 2015 Synod on the Family, and Elizabeth Johnson’s anthology: The Strength of Her Witness. Earlier she was invited by Voices of Faith as a panelist at a celebration of International Women’s Day in the Vatican.

She conducts sessions on gender sensitization, feminist theology and inter-religious  marriage, for seminarians and parish groups and is a resource person for the Federation of Asian Bishops’ Conference  (FABC), the Catholic Bishops’  Conference of India (CBCI) and the Bombay Archdiocesan Women’s  Commission. She played a key role in the institution of the CBCI Commission  for Women (1992), of which she continues to be a core team member, and the  drafting of the bishops’ “Gender Policy of the Church of India” (2010) which she presented at the “Women’s Ordination Worldwide” Conference (2015).

Currently  she is on the advisory bodies of a few international reform groups as well as the Jesuit Conference of South Asia (JCSA) and the Jesuit  Faculties’ Forum for South Asia (JFFSA) engaged in reorientation of the Assistancy.

Like John and Jesus, we too must be symbols of God’s initiative taking shape in the world.