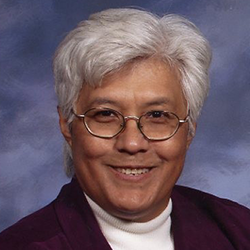 Sister Guadalupe, MCDP, was born in Baytown, Texas, daughter of Manuel and Refugia Ramirez, the fifth child of twelve children. As a Missionary Catechist of Divine Providence, she has been in pastoral ministry for fifty years as well as in leadership positions in her religious congregation.

Currently, she is serving as Associate Professor of Pastoral Theology at the Mexican American Catholic College in San Antonio, Tex. as well as coordinator of its “Certificado en Ministerio Pastoral”  Program. She also serves as adjunct faculty for Newman University in Wichita, Kansas, and the Catholic University of America in Washington, DC, serving as instructor in its Immersion Program in Mexico City for Seminarians from the U.S.

She is committed to the spiritual, ministerial, and leadership formation of pastoral ministers, especially Hispanics, and serves as workshop presenter in English and/or Spanish in catechetical, liturgical, and Hispanic Ministry diocesan and regional conferences.  She facilitates retreats and parish missions for lay women, Guadalupanas/os, and Women ACTS teams.  She also provides catechist formation and RCIA team development.

I have come to the conclusion that whenever I am presented with a new challenge, I want to ask “why me?” I need to change that and ask, “Why not me? “ So I ask you, “Why not you?”