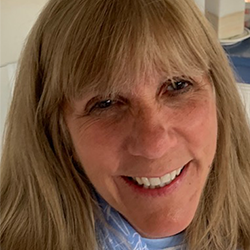 An avid proponent of her Catholic faith and Social Justice, Daniel Berrigan, S.J.’s books helped shape Jeanmarie Santopatre's passion for truth and social justice. She was a photojournalism major at Syracuse University and upon graduating from Syracuse, Jean embarked on a career as a newspaper photojournalist in Southwestern Connecticut.

After a successful newspaper career, Jean joined the public relations and publications staff at Fairfield University, CT as the university photojournalist. She was drawn to Ignatian Spirituality and completed the Spiritual Exercises in Daily Life of St. Ignatius. Jean was a mentor in the Ignatian Residential College and co-led student Mission Immersion trips with Campus Ministry.

At Fairfield, she studied Ignatian pedagogy and spirituality and received her Master of Arts. Jean’s discernment led her to embark on a new career path. She attended Yale Divinity School and completed her Master of Religion, Education, Leadership and Ministry in 2015. She completed two units of CPE as a Bridgeport, CT hospital chaplain and interned at St. Thomas More, the Yale Catholic chaplaincy while at Yale Divinity School.

Upon graduation from Yale, Jean was hired as the Director of Campus Ministry at Lauralton Hall, an all-girls Catholic, Mercy college prep school in Milford, CT. After four years as Campus Minister and Religion teacher, her discernment led her to seek a position in Ministry that engages Ignatian Spirituality and Social Justice. She joined St. Ignatius of Loyola Church in August 2019 as the Pastoral Associate for Faith Formation for Family and Ignatian Young Adults and Social Justice Ministry.

Jean has completed her formation as a Spiritual Director at the Murphy Center for Ignatian Spirituality at Fairfield University and received her certification in December 2019.

She resides in Bridgeport, Connecticut with her husband, Michael Freeman and their son, Dylan, Fairfield University ’20.

“Go forth and set the world on fire.” ~ St. Ignatius Loyola

We are being called today, more than ever, to witness where the Holy Spirit is at work in others, as well as in ourselves.