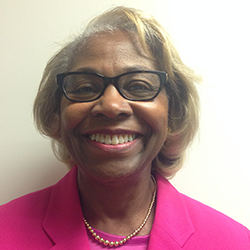 Joan F. Neal is an experienced strategist and independent organizational development consultant who has successfully helped leaders and organizations achieve their internal and external goals.

Ms. Neal has a wide range of experience in both the non-profit and for-profit sectors, particularly with faith-based institutions.  Currently, she volunteers as the Strategic Advisor and Government Affairs Fellow at NETWORK Lobby for Catholic Social Justice.  In addition to handling her own client base, she is a former consultant with The Reid Group and worked with them to execute a strategic pastoral planning process for the Archdiocese of New York.

Ms. Neal served as Vice President and Chief Planning Officer at Cabrini College in Radnor, Pennsylvania where she oversaw key institutional planning processes and Mission Integration.  Prior to that she was Executive Vice President of U.S. Operations at Catholic Relief Services, an international relief and development agency in Baltimore, Maryland.  There she founded the U.S. Operations division and developed and led the strategy for the agency’s outreach to Catholics in the United States.

Before relocating to the East Coast, Ms. Neal served as Associate Director of Leadership Greater Chicago, a leadership development network; Vice President of Public Affairs at Harris Bank/Bank of Montreal and Vice President/Branch Manager at the First National Bank of Chicago, among other leadership positions in the financial services industry.

Ms. Neal serves as a member of the Boards of the Center for Migration Studies of New York, the Mexican American Catholic College in San Antonio, and Catholic Theological Union in Chicago.  She is a former member of the Boards of Jesuit Refugee Services and the National Catholic Reporter.  She holds a Master of Arts in Pastoral Studies as well as a Certificate in Biblical Spirituality from Catholic Theological Union (Chicago) and a Bachelor of Arts in English from Loyola University (Chicago, IL).