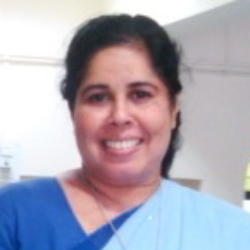 Sr. Julie George SSpS, who belongs to the Missionary Sisters Servants of the Holy Spirit, is a women’s rights lawyer who has been practicing law for the past 16 years. She holds a Master's Degree in law -- with human rights and family law as her specialization -- as well as a diploma in Canon Law. She began her legal career in 2003 with a Mumbai-based legal aid centre for women.  As a response to the growing needs of women victims of domestic violence and other forms of discrimination in 2006, she established an independent practice and has since secured justice for hundreds of women in cases of domestic violence, matrimonial issues, sexual abuse, property rights, and other types of cases. She was the Director of Streevani for the past nine years and currently she heads its legal unit with a team of lawyers working exclusively on women’s legal rights and mostly provides pro bono services to the poor and needy women.

She is also the Co-Convener of the National Lawyers Forum of Religious and Priests, which was initiated by Streevani in 2008 for the empowerment of women religious lawyers, under the title “Pursuit of Justice, a Prophetic Response of Women Religious in India”.   One of the objectives of Streevani is to work for justice through the legal profession, both directly and by creating a network of those involved in the ministry.  She is part of the programs for the empowerment of women religious and has co-organized three National Consultations on gender justice in the Church.  Julie George has presented papers at national and international forums.

This parable of the Good Samaritan is a powerful attack on all forms of prejudice and feelings of superiority.