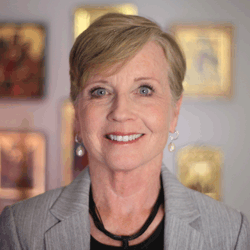 Headquartered in Washington, DC, CMN seeks to apply the Church’s teaching on the dignity of human life in the areas of capital punishment and restorative justice.

Karen has been an organizer and advocate since 1990. Her work has been associated with the Catholic Worker, the Catholic Campaign for Human Development, the San Jose Clinic, AIDS ministry and she is the DC Coordinator for the Ignatian Spirituality Project. Karen holds a Masters in Divinity from University of St. Thomas, St. Mary’s School of Theology, and has worked in spiritual direction since 1996.  She is the mother of five adult children and grandmother to seven grandchildren. Karen was awarded the 2011 Servitor Pacis Award by the Path to Peace Foundation, the Mission of the Vatican to the United Nations to promote peace.

Those who have walked the path toward forgiveness despite having experienced some of the greatest hurt imaginable are evidence of the way mercy can heal our hearts, our minds and strengthens our faith.