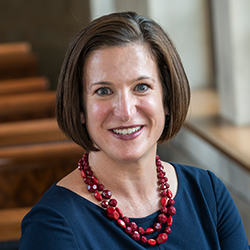 Kristin E. Heyer is professor of theological ethics at Boston College. She received her B.A. from Brown University and her Ph.D. in theological ethics from Boston College. Her books include Kinship Across Borders: A Christian Ethic of Immigration (2012) and Prophetic and Public: the Social Witness of U.S. Catholicism (2006), which won the College Theology Society’s “Best Book Award,” both published with Georgetown University Press.  She has also published the co-edited volumes Public Theology and the Global Common Good: The Contribution of David Hollenbach (Orbis Press, 2016); Conscience and Catholicism: Rights, Responsibilities and Institutional Responses (Orbis Press, 2015) and Catholics and Politics: Dynamic Tensions between Faith and Power (Georgetown University Press, 2008).  Her articles have appeared in Theological Studies,The Journal of the Society of Christian Ethics, The Journal of Catholic Social Thought, Political Theology, Asian Horizons, The Journal of Religion and Society, Health Care Ethics, New Theology Review, Commonweal and America.

Prior to returning to Boston College, she taught at Loyola Marymount University and Santa Clara University. She teaches courses on moral agency, migration ethics, Catholic social thought, and HIV/AIDS. She also serves as graduate director for the theology department. She has lectured widely in the United States, Europe, and India on such topics as immigration, the common good tradition, Catholic social movements, and feminist ethics.

She serves as co-chair of the planning committee for Catholic Theological Ethics in the World Church, a global network that fosters connections within the world church. She has also served on the boards of the Catholic Theological Society of America, the Moral Traditions Series at Georgetown University Press, and the Seminar on Jesuit Higher Education. She and her husband, Mark Potter, are raising two sons in Newton, Massachusetts.

Responding to God’s prophetic call in Exodus often requires the mercy and patience God shows in Luke’s gospel—we are called not only to resist empire and release the captives, but also to bridge-build and forgive.