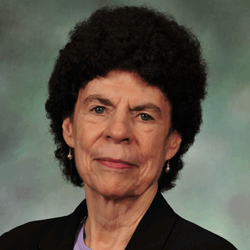 Margaret Farley is Gilbert L. Stark Professor Emerita of Christian Ethics at Yale University Divinity School.  She is the author or co-editor of eight books, including a new revised edition of Personal Commitments: Beginning, Keeping, Changing; but also Compassionate Respect; as well as her award winning Just Love: A Framework for Christian Sexual Ethics; and her newest book, Changing the Questions: Explorations in Christian Ethics.  She has published more than 200 articles and chapters of books on topics of ethical methodology, medical ethics, sexual ethics, social ethics, historical theological ethics, ethics and spirituality, and HIV/AIDS.  She was Co-director of the All-Africa Conference: Sister to Sister, an organization that has for 15 years facilitated the work of women in sub-Saharan Africa responding to the AIDS Pandemic.  She has lectured widely not only in the U.S. but in Southeast Asia, Western Europe, and Africa.

Professor Farley is the recipient of a variety of honors and awards, including the 1992 John Courtney Murray Award for Excellence in Theology, and the 2008 Grawemeyer Award in Religion for her book, Just Love, as well as 14 honorary degrees.  She has served on numerous editorial and advisory boards and national ethics committees.  She was a founding member of Yale-New Haven Hospital’s Bioethics Committee; and she served for eight years as Co-director of the Yale University Interdisciplinary Bioethics Center.  She is past president of both the Society of Christian Ethics and the Catholic Theological Society of America.

She has mentored countless Yale Divinity School students as well as Yale University doctoral students.   In her many years of teaching, she has also been called upon to preach.

Professor Farley is a member of the Sisters of Mercy of the Americas, West Midwest Community.

Like these women, we, too, believe and speak in our hearts and voices: “Jesus is risen as he said. Alleluia! He lives and is with us still. Let us rejoice and be glad.” Everything is new. It is time for us to Arise and meet the new dawn.