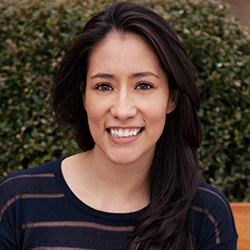 Marina was born in Chihuahua, Mexico and grew up in the border towns of Tijuana Baja California and Chula Vista, California. Marina graduated from Boston College Carroll School of Management in 2008 with a major in Accounting and a minor in Latin American Studies. She attended the School of Theology and Ministry, graduating with a master’s degree in Theological Studies in 2010.

In 2010, Marina founded the Montserrat Coalition, an innovative and holistic approach to supporting the needs of low socio-economic students beyond traditional models of financial aid.

In 2013, Marina began working at Catholic Extension Society, a national fundraising organization that financially supports mission dioceses in the United States. Marina’s particular focus is on the development of Hispanic lay leaders within the Catholic Church. At Catholic Extension, Marina travels nationally to serve catholic communities in the poorest and most marginalized areas of the United States.

For the past six years Marina has also volunteered her time at her parish St. Mary of the Angels in Jamaica plain. She has served in a variety of roles such as Parish Council Co-Chair and finance council member as a representative of the Spanish speaking community.

Today’s readings are a call to us to reflect and question where we are relying on social norms and structures rather than moving closer to the kingdom by loving our neighbor.