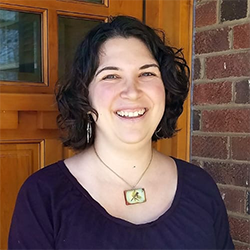 Marisa Vertrees has cared deeply for creation since her time growing up on a small island in Florida’s Gulf Coast, where she was fortunate enough to spend time in beaches and swamps, inspiring her to study environmental policy in school and become engaged in care for creation. She has also been a passionate advocate for social justice for the Church. After college, she was the Social Justice Director at St. Charles Borromeo in the Arlington Diocese, running the international missions programs, an advocacy ministry, and leading lobby days to the state capitol in Richmond and in Washington, DC.

Since then, she has been engaged in social justice in a number of avenues, primarily working on immigration, global solidarity and ending global poverty, and care for creation and climate work. She was the Organizing Director at the Global Catholic Climate Movement for two and a half years, an organization with volunteer leaders and member organizations in 92 countries, dedicated to engaging the Catholic community and grassroots in living out Pope Francis’ call in Laudato Si’ and halting global climate change. The Global Catholic Climate Movement is on the steering committee for the Season of Creation (www.seasonofcreation.org), an ecumenical organization.

Marisa Vertrees currently lives in Northern Virginia with her husband and three children, and is involved at her parish community at St. Ann’s.

When we focus too much on consumption and material wealth, we harm ourselves, we harm others, and we harm creation. We focus on the wrong things, letting it pull us away from our relationship with God, and forgetting to step back and set aside time for prayer and for God.