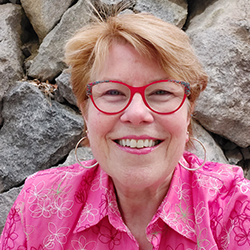 Monique grew up in southern California as a first generation American whose parents immigrated from the Netherlands. Raised in a bilingual household, and a learner at heart, observation, language, and curiosity have become her favorite tools for discovery and are often expressed through her artwork.  Aiming to join the Peace Corps after high school, she instead responded to a call to the religious life and ministered as a member of a catechetical community for almost 20 years. Surprising herself, Monique fell in love with teaching; her ministry has taken many forms: from dirt lot catechesis in the barrios of east Los Angeles to the beach cities of Orange Country, as well as year-round ministry at the community’s retreat camp for teens and families in the pine covered mountains of Big Bear, California. Yet perhaps her favorite of all, Reno Nevada, where she has continued to make her home since departing religious life.

Monique has served in the Diocese of Reno as Director of Faith Formation for almost 20 years, accompanies seekers as a spiritual director, and contributes monthly to the Faith Forum column, where leaders of multiple faith traditions come together over a given topic, in the Reno Gazette Journal. She easily admits that she still relishes both the challenges and the joys of following the Spirit.

When trying to achieve balance, Monique loves to go for long walks, often around Lake Tahoe, throwing a book - or a sketchpad - in her backpack, finding deep interior renewal and solitude in creation out of doors.

She received her M.A. in Religious Education at Fordham University in New York and continues to be passionate about serving the People of God with her life. She has served in ministry to the church for over 40 years.

If I cling too tightly to what I know, to what I prefer, will I miss out on what else God wants to reveal to me? What else will come to life?