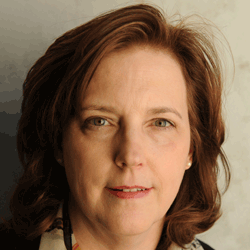 Nancy Dallavalle is Vice President for Mission and Identity and Associate Professor of Religious Studies at Fairfield University in Fairfield, Connecticut.  She received a bachelors degree in music from Benedictine College (Kansas), and a masters degree in theology from Saint John's University (Minnesota). Her Ph.D. is from the University of Notre Dame, where she wrote on the Trinity under the direction of the late Catherine Mowry LaCugna.

Professor Dallavalle's current work focuses on the meeting of feminist thought and Catholic theology.  She is a member of the American Academy of Religion, and currently serves on the steering committee for the Karl Rahner Society at the Catholic Theological Society of America. She has published scholarly articles in journals such as Modern Theology, Horizon, Philosophy & Theology and Liturgy. A recent book chapter is “Sex and Gender and Sexuality:  Competing Claims?  A Catholic Response” in Heft and Cadegan, eds., In the Lógos of Love: Promise and Predicament in Catholic Intellectual Life (OUP, 2015) 124-145.

She is currently on the advisory board of directors for the Liturgical Press, and the editorial board for the peer-reviewed journal, Horizons.

She speaks on Catholics in public life, social policy, sexuality and the family to general audiences, and has appeared on CNN and CBS as well as contributing to Commonweal and the Huffington Post.

When we really meet others face to face, the table around which we gather changes our dynamics -- truth speaks and prestige listens. Skin color, scars, wrinkles all fade. Eyes meet. Here, at this table, we know and love, and find that we are known, and loved.