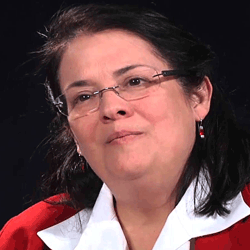 Nancy Pineda-Madrid is Associate Professor of Theology at Boston College. She is among the first U.S. Latinas to hold a Ph.D. in Systematic Theology (Graduate Theologian Union; Berkeley, California).  She is the first theologian to publish a book on the evil of feminicide arguing that this tragedy demands a fresh consideration of what salvation means.  Her book, Suffering and Salvation in Ciudad Juárez, (Fortress Press, 2011) has become required reading in classrooms across the country.  She has since co-edited Hope:  Promise, Possibility and Fulfillment, (Paulist Press, 2013) and recently finished a second co-edited book titled, With the Holy Spirit: Responding to the Giver of Life, (Paulist Press, Forthcoming 2017). She has published numerous articles. Currently, she is working on a book on La Virgen de Guadalupe.

Dr. Pineda-Madrid’s work has been recognized. In February 2011, America Magazine named her as one of seven most promising theologians of the next generation; in 2012, she received the Loretto Legacy Award for Religion and Theology. She has given public lectures at universities across the United States, Latin America and Europe.  She is Vice President of the International Network of Societies of Catholic Theology (INSeCT), and past president of the Academy of Catholic Hispanic Theologians of the United States (ACHTUS). She as born in Albuquerque, New Mexico, and when she was nine years of age her family moved to El Paso, Texas, where she lived until she was twenty-five.  She now lives in Boston with her spouse Larry Gordon.

The Juan Diegos of this world know that Jesus was born not only in Bethlehem some 2000 years ago, but is waiting to be born anew in the lives of modern day Juan Diegos.