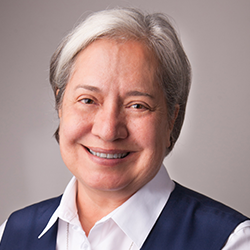 Norma Pimentel is a Sister with the Missionaries of Jesus. As Executive Director of Catholic Charities for the past 10 years, she oversees the charitable arm of the Diocese of Brownsville, providing oversight of the different ministries & programs in the areas of emergency assistance, housing assistance, military assistance, clinical counseling, and pregnancy care to all four counties in the Rio Grande Valley.

She was instrumental in quickly organizing community resources to respond to the surge of Central Americans seeking asylum in the United States and setting up Humanitarian Respite Centers in McAllen, Texas. These efforts captured the world’s attention, drawing news media from around the globe to cover the plight of these desperate Central American refugee families, and compelling thousands of individuals from this country and others, to contribute their time, talents, and treasures to serve and support them.

Before overseeing Catholic Charities of the Rio Grande Valley, Sister Pimentel was one of the leaders who directed Casa Oscar Romero—a refugee Shelter for Central Americans fleeing their war-torn countries. The shelter provided emergency relief and temporary housing for hundreds of thousands of refugees. Sister Norma Pimentel earned her Bachelor’s Degree in Fine Arts from Pan American University, a Master’s degree in Theology from St. Mary’s University in San Antonio, TX, and a Master’s degree in Counseling Psychology from Loyola University in Chicago, IL.

...as followers of Jesus, the most urgent priority that we have is to see the face of God in every human being and especially those who are most vulnerable in our community...