Happy Advent!  Today we begin a new liturgical year.  So perhaps it’s a good time to review our relationship with our loving God and how we can commit ourselves to more active discipleship in a fraught world that so desperately needs it.

Advent is one of the shortest seasons, just four weeks long, symbolized by the four candles we light on the Advent wreath.  Ever since our daughters were little we have enjoyed lighting the candles at our dinner table.  We always sing a verse of “O Come O Come Emmanuel” before saying grace; and now that they’re older, we even manage a little harmony.

Advent is commonly seen as a time of preparation for the Lord’s coming, both at Christmas, and his second coming at the end of time.  And yet I have always chafed against a sense of passivity in the way Advent is portrayed as a season of waiting and watching.  If, however, we take a closer look at our Gospel reading today, we see that Advent is clearly a time when Jesus is calling us both to carefully notice God’s action around us and faithfully act as disciples.  As St. Ignatius said, we are called to be contemplatives in action.

So why does the Church choose to start the new liturgical year with this gospel reading?  You would think that since this is the year that we will focus on the gospel of Mark, we would begin today at its geginning. But today we are first reminded of the big picture, what we need to focus on: that is, the coming of the reign of God, which will be the definitive flourishing of God’s love, justice and peace throughout all of creation.  Jesus is calling us here to live lives of constant, faithful, active vigilance in service of God’s reign.

I invite you to the delights of biblical scholarship – it’s like satisfying detective work!  Today’s reading is located at the end of the 13th chapter of Mark’s gospel.  Scholars believe that Mark’s was the first of the four canonical gospels to be written down, most likely in Rome in the decade of the 60s, precisely at a time when the Christian community in Rome lived under the threat of persecution, and some of the Jewish people in Palestine were engaged in a rebellion against their Roman occupiers.  Tragically, in the year 70, the Romans destroyed the revered temple in Jerusalem.  All that is left is a portion of the Western Wall, known as the Wailing Wall.

Jesus predicts the destruction of the temple and warns his disciples of possible future wars, natural disasters and persecution to come before the Son of God will come again in glory.  It is frightening reading – and sounds all too familiar with recent events worldwide.  And then, in Chapter 14, Jesus journeys to his own passion and death.  Mark inserts this short parable of Jesus’ between the two grim narratives to assure and encourage us.

The destruction of the temple, the center of the Jewish people’s religious life and symbol of their nationhood, was devastating.  When people of any age – then and today – face such trials and tribulations, they can become spiritually deadened, paralyzed and divided.  So in Mark’s 13th chapter Jesus urges his disciples to patiently and confidently keep faith.  He encourages them not to be taken in by false prophets or worry or despair about events to come, because in all things God will be with them. Apt advice indeed for today.

What is so interesting is that at this very point in Mark’s gospel, which we don’t get to appreciate in the English translation, Jesus shifts the verb he uses to refer to watching.  In describing and predicting the tribulations to come in the first part of Chapter 13, Mark has Jesus use the Greek verb blepo, which means seeing in the sense of spiritually discerning as you observe what’s going on around you, so that you as a disciple won’t be misled.  But in verse 33, the beginning of our reading, he switches to the Greek verb gregoreo, which means to watch, be vigilant, and act faithfully.  It’s where we get the name Gregory.  So our spiritual perception and discernment about what is happening around us (blepo) must also lead to faithful, vigilant action (gregoreo).

In our parable, Jesus is the man traveling abroad; he has ascended to be with God.  He has left “home” that is, the community of disciples on God’s earth, and has placed his servants “in charge.”  Jesus has given his servants authority and responsibility to act on his behalf until his return; all is entrusted to us.

Each of us servants has her or his own work, with an unspecified gatekeeper being ordered to be on the watch.  But Jesus is exhorting All of his disciples to Watch: “What I say to you, I say to all: ‘Watch!’” (v37).

In the parable Jesus invokes the four Roman watches of the night to suggest times when we as disciples are less likely to be vigilant. What is it to watch in the 21st century?  One problem is that we watch too much!!  24-7 constant information on our TVs, laptops and smart phones -- they all have the potential to distract us from discipleship  -- or, if we use them wisely, they can be effective tools.   Do we take the time for prayerful discernment to watch how God’s reign is unfolding in history? Do we truly look through the lens of our faith and identify the serious obstacles that impede the full flourishing of God’s love, and thus demand our attention? – things like widespread hunger, poverty, and war?  One obvious difference between our own time and that of Mark’s listeners is our globalized economy.  Isn’t Jesus calling us to be attentive to the urgent challenges facing the least of our sisters and brothers worldwide?

I also encourage you to reflect, during this Advent season, who can serve as examples for us of people who have watched, who are whole-hearted, generous disciples? *  In our own day, Advent is a good time to look to the examples of the martyrs of El Salvador whose anniversaries we celebrate at this time of year.  Their faith-filled discernment of injustice and subsequent work with and on behalf of the poor led to their deaths.  On November 16 we marked the anniversary of the six Jesuits, their housekeeper and her daughter, and on December 2 we honor the four U.S. churchwomen who were murdered in 1980.  I had the privilege of speaking at length with Jean Donovan and Martin Barro, SJ shortly before they were killed, and both were fully aware that what they were doing put them at risk of sharing the same fate as thousands of Salvadorans, most of whom have gone unnamed and unnoticed beyond their own immediate families and neighbors.

While most of us are not called to martyrdom, finally I do urge you to take time during Advent to prayerfully discern what is the work to which Jesus is calling You to serve the reign of God.  The good news is that we are not called to watch alone.  Presumably the servants of the house collaborate in their work!  We are called to rejoice in and support the gifts others have been given to work for God’s reign, just as the apostle Paul does in his letter to the Christian community at Corinth that serves as today’s second reading.   Together Jesus calls to us, with all our failings, our apathy, our misplaced priorities, and yet our hope: “Gregoreite!!”  Together, let us watch!  And relish this Advent season.

* Unexpectedly, in Mark’s gospel, it is the faithful actions of two unnamed women that serve like bookends around the frightening reading of Chapter 13.  Jesus lifts the women up as examples of the prayerful discernment and vigilant action to which he is calling his disciples – and he contrasts the women’s generosity with the ostentation and hypocrisy of others. At the end of Chapter 12 [41-44], a desperately poor widow gives two copper coins—worth no more than a penny—to support the temple, as opposed to the rich who give only out of their surplus.  And at the beginning of Chapter 14 [3-9], an anonymous woman anoints Jesus on the head with expensive oil while he is dining at the home of Simon the leper; thus She recognizes Jesus – unlike anyone else present – as the Messiah.  Again, Jesus points us to be alert and look to the unnamed, the unimportant, the unexpected people who challenge Us to be more generous, wholehearted disciples. 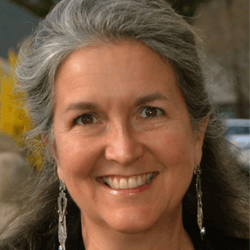 Elizabeth A. Donnelly is a frequent speaker and writer on Catholic affairs.  As a trustee of a Catholic family foundation, she is part of a group of female foundation leaders who have engaged in dialogue with top Vatican officials on the role of women in the Church.  After graduating Georgetown University (SFS ’78), she served on the staffs of Bread for the World and the Presidential Commission on World Hunger and as a Maryknoll Lay Missioner in Lima, Peru.  She studied Christian social ethics at Harvard Divinity School (MTS’85), and did doctoral work in international political economy and ethics in Harvard’s Department of Government, writing extensively on the Catholic Church’s contribution to the movement for debt relief for heavily indebted low-income countries.  She has served on several boards, including those of Jesuit Volunteers International, Maryknoll Lay Missioners, Bread for the World, and the Ignatian Solidarity Network.  She and her husband have three daughters, two educated at Georgetown and one at Loyola Maryland.