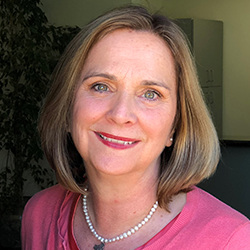 Cambria Tortorelli has served as the Parish Life Director (pastoral leader) at Holy Family Church in South Pasadena, California, since 2008.  Born in Bermuda to British parents, Cambria worked in European sales and marketing at the BBC in London, and backpacked around Asia and South America, before moving to Japan for three years where she managed an English school.  Cambria immigrated to the USA in 1994.

After arriving in Los Angeles, Cambria spent 11 years at the Volunteer Center of Los Angeles, eventually becoming the Assistant Executive Director.  In 2006, Cambria took over the role of President of Valley Interfaith Council, a nonprofit organization which at that time provided services to over 85,000 seniors, families in need and people with disabilities per year.

Cambria served as the Moderator for the Archdiocesan Pastoral Council (the advisory council to the Archbishop of Los Angeles) for 12 years.  She served on the Archdiocesan Justice and Peace Commission for 10 years and is one of the founders of Fair Trade LA.  In 2011, Cambria received the Ignatian Volunteer Corps Madonna della Strada award for her commitment to social justice. She has conducted numerous workshops and retreats, particularly in the area of social justice.  Cambria is a member of the St. John’s Seminary Board of Trustees, as well as the Mount Saint Mary’s University Board of Trustees and the board of Imagine LA, a nonprofit which is dedicated to ending the cycle of family homelessness and chronic poverty.

Cambria has a BA in English Language and Literature from Oxford University in England, and a Master’s Degree in Religious Studies from Mount St. Mary’s University in Los Angeles.

It is through healthy loving relationships that grace is unleashed in the world.