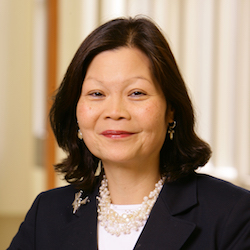 Dr. Carolyn Y. Woo is President & CEO of Catholic Relief Services, the official international humanitarian agency of the Catholic community in the United States. She came to CRS in January 2012 after a distinguished academic career.

Before coming to CRS, Carolyn served from 1997 to 2011 as dean of the University of Notre Dame’s Mendoza College of Business. During her tenure, the Mendoza College was frequently recognized as the nation's leading business school in ethics education and research. It received and has retained top ranking from Bloomberg Businessweek since 2010 for its undergraduate business program. Prior to the University of Notre Dame, Carolyn served as associate executive vice president for academic affairs at Purdue University.

Carolyn was born and raised in Hong Kong, and immigrated to the United States to attend Purdue University, where she received her bachelor’s, master’s and doctorate degrees, and joined the faculty. Her teaching, research and administrative leadership have been recognized through Best Paper Awards by the Academy of Management, selection as one of 40 Young Leaders of American Academe by Change Magazine, the journal of the American Association for Higher Education; distinguished alumna and honorary alumna by Purdue University and University of Notre Dame, as well as the conferral of honorary doctorates from Providence College, Loyola University of Maryland, Manhattan College, Wake Forest University, the University of Notre Dame and others.

Carolyn was the first female dean to chair the accreditation body for business schools—AACSB: Association to Advance Collegiate Schools of Business—and directed its Peace Through Commerce initiative. She helped launch the Principles for Responsible Management Education for the United Nations Global Compact.

From 2004 to 2010, Carolyn served on the Board of Directors of CRS. Her current board service includes: Aileron Foundation; Catholic University of America; Archdiocese of Baltimore Independent Child Abuse Review Board; Migration & Refugee Services, United States Conference of Catholic Bishops; and the International Policy Committee, United States of Conference of Catholic Bishops.

Carolyn was one of five presenters in Rome at the release of Pope Francis’ encyclical on the environment in June 2015. Her faith journey and work at CRS are recounted in her book, Working for a Better World, published in 2015 by Our Sunday Visitor.

Representing CRS, Carolyn was featured in the May/June 2013 issue of Foreign Policy as one of the 500 Most Powerful people on the planet and one of only 33 in the category of “a force for good.” Carolyn’s Catholic News Service monthly column took first place in the 2013 Catholic Press Association Awards in the category of Best Regular Column—Spiritual Life.

Carolyn is married to Dr. David E. Bartkus. They have two sons, Ryan and Justin. Her parish is the Basilica of the National Shrine of the Assumption of the Blessed Virgin Mary in Baltimore.

We should be prepared that-- in what our worldly and even educated minds do not anticipate-- God will manifest himself.