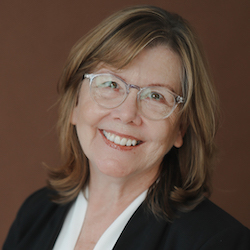 Mary J. Novak serves as Executive Director of NETWORK Lobby for Catholic Social Justice in Washington, D.C. NETWORK was founded 50 years ago by Catholic Sisters to effect structural change at the federal level. Prior to joining NETWORK, Mary served Georgetown University Law Center as a Mission Integrator and Adjunct Professor of Law with a particular focus on Ignatian spirituality and pedagogy at the intersection of psychology, spirituality and the work of justice. Mary studied and trained in theology, spirituality, and spiritual direction at Santa Clara University and the Washington Theological Union. She has extensive experience in pastoral ministry, including the ministry of spiritual direction and circle processes.

A graduate of Santa Clara University Law School, Mary practiced law for over a decade in the areas of California water, energy, environmental and natural resources, while also serving on a team pursuing a capital appeal for a man on the largest death row in the United States. She later joined Santa Clara University, first serving as Clinical Law Faculty and later as the Director for Faculty Development in what is now the Ignatian Center for Jesuit Education.

Mary is a peacebuilding practitioner, having studied at Eastern Mennonite University’s Center for Justice and Peacebuilding. She focused her final project at Washington Theological Union on Catholic Peacebuilding in the context of Kenya’s post-conflict reconciliation. She returned to the U.S. to serve the Leadership Conference of Women Religious. Mary is an Associate of the Congregation of St. Joseph (CSJ) and the founding Board Chair of the Catholic Mobilizing Network to end the use of the death penalty and promote restorative justice, part of the CSJ Network.

The question almost daily is how are we to act with God’s justice in a world that, for some of us, is much more comfortable without it?

Jesus’ initiative to heal and restore is absolutely central to his ministry in the Gospels. Jesus invites us to be recipients and agents of this same healing in the world.