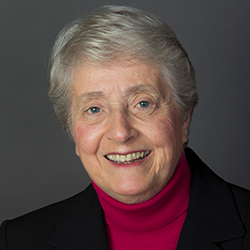 Sandra Marie Schneiders, IHM is professor emerita of New Testament Studies and Christian Spirituality at the Jesuit School of Theology (JST) of Santa Clara University (SCU). Graduating in 1975 with an STD from the Pontifical Gregorian University in Rome, Dr. Schneiders became one of the first two women post-Vatican II to earn a terminal degree from a pontifical university. In 1976, Dr. Schneiders began her forty- plus-year career of teaching in Berkeley, California at JST, where she became the first non-Jesuit and first woman to earn tenure. As the author of nearly one hundred academic articles, more than a dozen books, and over seventy chapters in edited monographs, she has emerged as a senior scholar in fields ranging from Johannine literature to hermeneutics, feminist biblical interpretation, spirituality of religious life, and the theory of spirituality as academic discipline. She helped establish the first doctoral program in Christian Spirituality at the Graduate Theological Union, an interreligious consortium of seminaries (including JST), theological institutes, and centers for religious study associated with University of California, Berkeley. As an ongoing series editor of the Classics of Western Spirituality, she encourages the growth of outstanding scholarship in the discipline by continuing to build the premier collection in English of introductions to key figures in religious history with critical editions of their primary texts. She has received dozens of honors, including the Yves Congar Award for Theological Excellence (2014), the Monika K. Hellwig Award for Outstanding Contribution to Catholic Intellectual Life (2013), and the Leadership Conference of Women Religious Annual Outstanding Leadership Award (2012). In 2015, Dr. Schneiders donated her personal papers to the Archives & Special Collections at SCU to mark the library’s first collection by a woman religious. In May of 2018, SCU will confer upon Dr. Schneiders her sixth honorary doctorate, at which time she will also address the graduating class at JST as keynote speaker.

John’s Easter narrative is not, first and foremost, about what happened in Palestine in the first century. It is about us, our personal and corporate experience of Jesus, risen and living within and among us today...